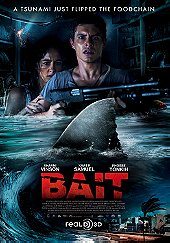 I've just finished watching it and I have to say I enjoyed it. The only let down was the CG sharks and tsunami. The budget was $20 million so why was the whole thing CG sharks? But there is some scenes which use mechanical sharks but I wish they kept it like that throughout.. Kirby's accent was kinda annoying and I think he was trying to do an Australian accent since the whole thing takes place there. But I enjoyed the story and everything else about it.

When I saw the first trailer for this I was looking forward to seeing it because they didn't show any signs of CG sharks, but then came the red band. That showed CG sharks but that didn't really stop me from watching it since it had a lot of celebrities that I knew.

So in the end it wasn't such a bad movie, it was surprisingly good despite the CG sharks it was enjoyable and it will be something I would watch again after a while.