Walkers Ain't The Problem, It's The Game That Is 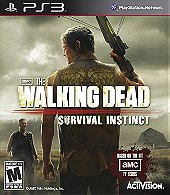 I'm really disappointed with this, the graphics are awful and too be
honest really ugly, and I don't understand, Activision made this game,
the company that made Call of Duty, a game series with much better
graphics and of course Family Guy: Back to the Multiverse, another game
with terrible graphics and a really disappointment.

You can't upgrade or customise your weapons to make them more powerful,
you can't kick and thing that I found stupid was the fact that you
can't jump on big cars like pick-up trucks.

The walkers ain't scary looking and if you were surrounded by a horde
and on top of a car you would easily see that some of the them have the
same faces. When I had two walkers coming towards I thought if hit one
of them with my weapon then the other next to it will get hit as well,
but it doesn't, whereas in other zombie games such as Dead Island when
you hit a zombie other ones next to it will get hit as well.

You can help survivors in different areas, but all you do is retrieve
stuff for them like batteries for a radio and that wasn't really much
of a challenge, but if they told you to find someone they knew like a
friend or loved one to see if they're alive or not would of been a bit
better cause it raises the question, are they alive or not? If you have
a survivor in your group with a low condition or there isn't enough
room in your vehicle then you'll have to dismiss them which doesn't
sound bad as there's no dialogue of them begging to stay or something
like that and not much is told about them so you wouldn't really care
about their fate.

The only thing I liked about this game is that the Norman Reedus and
Michael Rooker from the TV show do the voices of their characters they
play in the show.

So you're a fan of the TV show like I am then I strongly suggest that
you avoid this game due to it's terrible graphics and it's lack of
challenge.