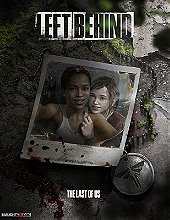 I love "The Last of Us" and when I heard about a DLC (downloadable content) for it and knew I had to buy it. To start off I love the relationship between Ellie and Riley, it shows that even though they live in a world with infection they have each other to look out for.

The infected are really creative, they have their own name, different movements and sounds when the player is spotted. But the annoying infected is the Clickers, their blind but are attracted to movement and so when I try to kill one while it runs towards me I get killed (so only kill it from behind.)

Overall, Left Behind is an amazing experience with fun mini-games, exciting gameplay and well-written dialogue it is certainly a must- have for people who've played "The Last of Us."