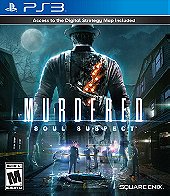 I have to say I really enjoyed this despite some negative reviews critics have given it. When I first saw the E3 trailer for it I was really excited to play it, but when it was released I was surprised by the ratings that were given by gaming websites such as IGN, who gave Murdered: Soul Suspect a 5.5/10 which in my opinion should be higher.

Anyways, I thought this was excellent, playing as a ghost and solving your own murder got me wanting this game it's unlike any other crime games I play and that's what I thought was so cool about this. To be honest, I didn't find the graphics bad I thought they were quite good, the writing was great, the characters were interesting enough, the demons were really creepy and the ghost abilities were really cool.

But I have to admit I didn't like some things such as Salem, it's interesting but I don't like the fact that there's no map so you don't know where you're going and there isn't much to do except find collectibles, possess people but you can't do much when possessing people as you can only read their minds.

The twist I was kinda of disappointed with, but I was still surprised when it was revealed to be Abigail as "The Bell Killer." Though I was surprised when I saw that Abigail possessed Ronan (before he was killed) to kill Sophia.And also, it would of been better if it was a living person committing the murders instead of a ghost who possess people to commit them.

Overall it was a great experience with interesting characters, good twists, superb writing and good quality graphics. But may fail to impress due to it's short gameplay (I finished the game the day after I got it.) But if you're interested in crime/mystery games I would recommend this!