Its staggering ineptitude renders it hilarious... 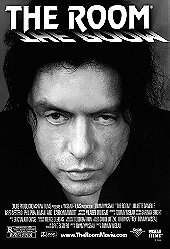 "You are lying! I never hit you! You are tearing me apart, Lisa!"

There are countless bad movies out there. Most of them end up fading into obscurity on account of their downright awful nature rendering them unbearable. Yet, every now and then a terrible movie is released that becomes a classic solely because of its staggering ineptitude. 2003's The Room is a textbook example of such a movie. As of 2010, this film has developed a massive cult following, and some regard it as the Plan 9 From Outer Space of this generation. In short, The Room is a film that's amazingly, unbelievably inept in every conceivable aspect. Experiencing the film is akin to stepping into an alternate universe devoid of recognisable human behaviour and where up is green. Financed, written, directed, produced by and starring Tommy Wiseau, The Room is the type of film that's unleashed upon the world when an incredibly overconfident, untalented narcissist finds a way to access filmmaking equipment. 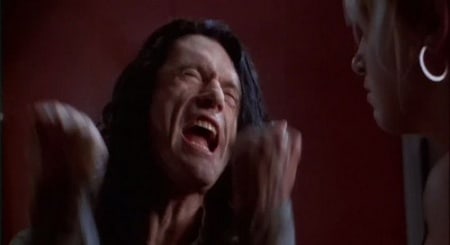 A simple, terribly-realised story of love gone wrong, The Room stars Wiseau as a businessman named Johnny. His slutty live-in girlfriend Lisa (Juliette Danielle) is tired of their relationship and chooses to turn her attention to Johnny's best friend Mark (Greg Sestero). Mark succumbs to Lisa's skanky charms all too easily, but always regrets it due to his friendship with Johnny. Meanwhile, Johnny is oblivious to Lisa's affair, and continues to shower her with chocolates and roses before taking her to bed. On top of this, Lisa's mother advises Lisa to marry Johnny because he's a good provider and a good catch, and it does not matter that she can no longer stomach him. The events that stem from this basic set-up can best be described as a ridiculous series of non-sequiturs.

Wiseau's screenplay is packed with half-baked ideas, out-of-place plot elements, laughably terrible dialogue, and countless screenwriting no-nos. Production blunders litter every single scene of the movie, with frequently out-of-sync dialogue, fucked up continuity, strange staging (Johnny and Lisa's television is situated behind a couch), hilariously bad chroma key effects, endless random establishing shots of San Francisco landmarks, bizarre sex scenes, and frequently out-of-focus cinematography which came as a consequence of the inexperienced director electing to shoot on both 35mm and HD on the same mount. Plot points about cancer, drug money and pregnancy are introduced into the narrative but are never mentioned again. Meanwhile, characters come and go without explanation, most noticeably Johnny's psychologist friend played by Kyle Vogt, who quit the film before his scenes were completed. It's hard to use words to describe the terrible acting in this movie, too. Wiseau is the most notable offender, as he delivered his lines as if he was reading the instructions on a tax form.

Yet, The Room is absolutely fucking hilarious from start to finish. It's best viewed with a crowd of people who can appreciate this form of atrocious cinema. Loads of fun can easily be derived by watching it with friends and picking out the plot elements which make no sense. For instance, four characters head outside to play football while wearing tuxedos for no reason - and the game itself consists of the people standing three feet apart tossing the ball to one another. Also funny to watch are the cringe-inducing sex scenes in which Wiseau is clearly unfamiliar with how the missionary position works. It looks as if he's fucking his co-star's belly button. Meanwhile, the music never fits with what's happening on screen, and the abysmal dialogue is a constant source of amusement. Added to this, the meaning of the title is never explained. It's called The Room, but it's set in many different rooms. The hilarity of this film is never-ending.

What truly distinguishes The Room from other legendary turkeys is the sheer narcissism of Wiseau which is on screen for all to see. A mysteriously-accented, sleepy-eyed figure who emanates the polar opposite of charisma, Wiseau's movie simply exudes an intense amount of self-absorption. During the movie, characters constantly state that Johnny is a great guy, yet there is no evidence to corroborate this. Viewers are expected to believe Johnny treats Lisa "like a princess", but the writer-director's understanding of relationships is so poor that Johnny is only seen doing the bare minimum (flowers, declarations of love, and so on). Meanwhile, Lisa is depicted as a slutty, malicious bitch who betrays Johnny out of spite rather than any dramatically credible reason. Wiseau is also crazy enough to believe that viewers will want to see his creepy naked form in the agonisingly long, bizarre sex scenes. 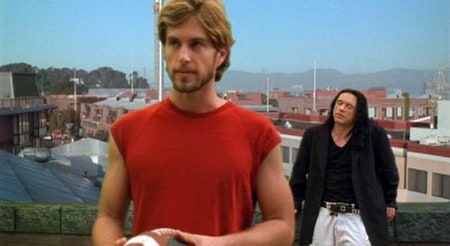 While one can laugh at The Room constantly, there are still dead spots, and the cinematography is at times so ugly that the film is difficult to watch. When it's funny, it's funny, but when it's boring, it's boring. Additionally, as with all bad films, it's truly fascinating to think that Wiseau had a vision so strong and clear that he could actually see the film through to completion and believe he made something good. Thus, Tommy Wiseau must be admitted into the directorial pantheon which also includes Ed Wood. What's also highly amusing is that Wiseau does not mind people thinking that The Room is bad. On the matter, he said "People should feel free to laugh, cry and express themselves. Just as long as they don't hurt each other." The guy's a certified nutcase. God bless him.