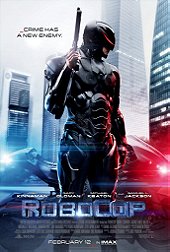 "Forget the machines. They want a product with a conscious. Something that knows what it feels like to be human. We gonna put a man inside a machine."

Now here's a familiar sight - a PG-13 remake of an ultraviolent Paul Verhoeven classic. First there was the critical and commercial failure of Len Wiseman's Total Retard back in 2012, and now we have 2014's RoboCop remake, which was spearheaded simply because MGM is in desperate need of a new money-maker. Several years ago, Darren Aronofsky was attached to direct a (presumably R-rated) RoboCop reboot, which would've been something worth seeing. Alas, in its current form, RubberCop is a flaccid action flick; soulless, generic, committee-designed pap. Written by Joshua Zetumer and directed by Brazilian filmmaker José Padilha (Elite Squad), it's riddled with plot holes, inconsistencies, vague character motivations, and iffy CGI. Even if it wasn't a remake of an '80s masterpiece, RoboCrap suffers from plenty of major issues as a standalone motion picture.

Due to wary public opinion and an unwavering government act, robotic law enforcement units are outlawed despite their potential to eliminate crime across America. But robotics manufacturer OmniCorp is determined to work towards an all-artificial police force, stumbling upon a loophole that could net them a massive profit: placing a man into a machine. In Detroit, detective Alex Murphy (Joel Kinnaman) is targeted by a gang of criminals who leave him horribly injured and charred after planting a car bomb. Murphy's wife, Clara (Abbie Cornish), is left to decide her husband's fate, eventually signing the consent forms to have him kept alive by fundamentally turning him into a robot. Thus, RoboCop is born, hitting the streets of Detroit with highly developed technology to help him clean up the city.

To his credit, Zetumer tries to create his own spin on the 1987 RoboCop by not sticking too closely to the film from a structural perspective. However, he retains many of the broad strokes, and the result simply doesn't work, as such story points don't fit into this newly-designed universe. RoboSchlock spends much of its runtime focusing on the development of Murphy as Robo, as tests are carried out and the suit is developed. Hell, he doesn't even hit the streets until about the 85-minute mark, leading to a rushed third act involving Murphy setting out to solve his own murder, which takes up less than ten minutes of screen-time. And speaking of elements from the original being used, a few famous lines are recycled, but the outcome is truly awful. Facepalms are imminent! 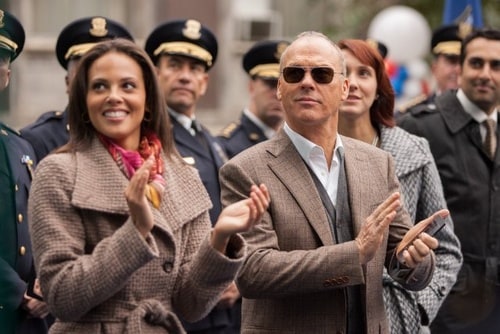 Here's the big problem: Murphy is revealed to be alive to his wife and child, and the media knows that he's Alex Murphy. Thus, the project is in the public eye, so OmniCorp tries to be as politically-correct as possible, but it's to the detriment of the project. See, the designers consistently return to the drawing board directly because Murphy is conscious and retains his humanity. In the original movie, the designers knew that they needed to erase Murphy's memories and emotions to make RoboCop work, and hence nobody outside of OmniCorp knew that Murphy was behind the visor. Here, Murphy's emotional intelligence and humanity is gradually chipped away over the testing period, before he ultimately breaks programming to get back to where the original wound up. It's a long-winded way of telling the same story, adding unnecessary flab to the narrative.

Admittedly, the public needed to know that RoboCop was part human, hence pushing Murphy into the public eye and not erasing his memories and consciousness, but it's nevertheless a dumb move. Why didn't OmniCorp use Murphy's body without permission and claim it was some second-level programmer inside the company who was in an accident? Or better yet, why don't they flat-out lie and say that it's a human inside a heavily armoured mech suit? It's weird that OmniCorp are so PC for the majority of the flick and don't do anything shady right up until the very end, when the film suddenly needs a villain. 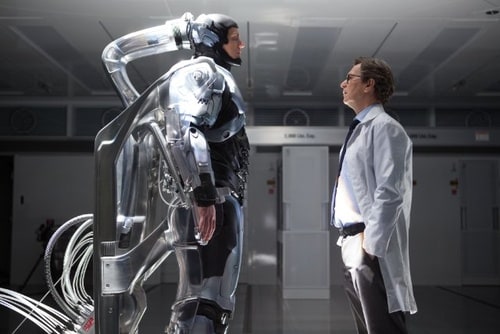 This brings us to the next big issue: there's no proper villain here. Sure, there's the guy responsible for Murphy's killing, but said character has no presence and his name never even sticks. The only time he's notably on-screen is when Murphy sees him through infrared view as he kills him. Really? This is the replacement for Clarence Boddicker from Verhoeven's movie? Zetumer and Padilha subsequently attempt to create crooks out of corrupt police officers, but the motivations are vague and unclear. And THEN the film tries to make an OmniCorp executive the main villain, since OmniCorp wanted to use RoboCop simply to get the public's support on robotic police officers. Once the political act forbidding robot police is abolished, they decide to kill Murphy simply because the script needs a major bad guy and this is the best that Zetumer could come up with. The “villain” doesn't really do much wrong up until this point, showing none of the wickedness that Dick Jones exhibits in Verhoeven's movie. And Murphy kills this “villain” in the most unexciting, contrived fashion imaginable, while armed men stand around watching. Maybe this is why the movie was delayed by a few months - this bollocks was likely added at the eleventh hour.

Zetumer's script tells us that Detroit is plagued with crime, but apparently we're meant to take it all on faith. Thanks to RubberCop being PG-13, the city is clean and sanitised, with no evidence of urban decay or moral collapse. It looks like a perfectly fine place to live, even though the real city of Detroit is renowned for being a shithole. We as an audience cannot BELIEVE that Detroit NEEDS robotic law enforcement, which is a big fucking problem! On top of this, with the family-friendly certificate, the editing is very restrictive during the action scenes, with awkward cutaways which leave us unsure whether Murphy has killed, maimed or just stunned his opponents with his politically-correct taser. Guns go off and bullets are presumably flying all over the place, but nothing makes an impact - Padilha makes no attempt to depict this future-world as scary. Hell, there's one massive shootout that takes place in darkness literally because it means no visible on-screen violence. Some might say that the baddies cut the power so Murphy would be unable to see them, but they're dealing with a dude whom they know wears a visor which would likely have night vision (it does). 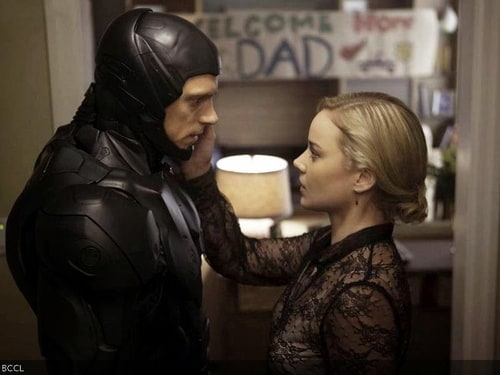 RetardCop might have a few halfway entertaining action beats, but for the most part, the action is sedate, generic and unsatisfying. A throwdown between Murphy and a few big robots is a mess of unclear digital effects and woeful shaky-cam. The chaos is a headache, and pales in comparison to the epic battle between Murphy and the ED-209 from the end of RoboCop 2. It doesn't even have anything on the first RoboCop, when an ED-209 is blown apart in two seconds thanks to Murphy using an explosive rifle. It's quite disappointing just how obvious the CGI is. Oh, and if you're wondering if this new movie has any satire? Forget about it. We cross to Samuel L. Jackson the news reporter from time to time, but there's no meaty satire here, and there are no laughs to be had.

And what of the suit, I hear you ask? Awful. It looks like a suit because it IS a suit. In the original, Murphy was literally a man with a mechanical body that was essential for keeping him alive. In this iteration, he can disassemble himself like Iron Man - in fact, the suit looks purposely modelled after Iron Man. Rather than a badass steel soldier, this RoboCop looks like a metrosexual cunt wearing a Power Rangers outfit crossed with a wet suit. Worse, when Murphy drives through Detroit on his motorcycle, it just looks like a wanker in a fancy suit driving a fancy fucking motorcycle. The result looks pretty cheap, like the filmmakers just took their equipment to a random American city street and filmed without any thought towards set dressing. It looks weird and out of place. Isn't it funny that the special effects and production values of this 2014 motion picture look worse than its 1987 counterpart... 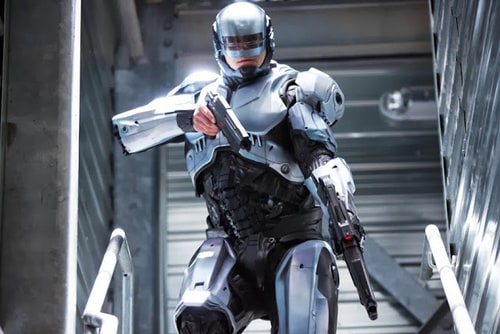 Murphy's family are kept in the limelight for the majority of the movie, saddling him with the chore of keeping his marriage intact despite his condition, but this narrative aspect fails for two reasons. For starters, there is no spark to the relationship, as Kinnaman has no presence or charisma, and is hard to care about. More pertinently, the film mistakes humanity for TV-level melodrama. RoboCop is not a family drama or a saccharine romance, nor is it a youth novella like Hunger Games or Divergent. Yet, this is the direction that Padilha has taken this vanilla sell-out ass-rape of a sci-fi classic. Fuck that. The rest of the performances are a mixed bag. Cornish is strong as Murphy's wife, and Gary Oldman remains solid as always, but the latter is undercut by the confused script which obfuscates his motivations. Faring worse is Michael Keaton, a great actor who's utterly wasted on a thankless role. And the aforementioned Jackson is downright embarrassing. Rounding out the main cast is Jackie Earle Haley and Jay Baruchel, who are serviceable but underutilised.

Naturally, all of the aforementioned criticisms will probably prompt armchair critics to ask, "How would you do a RoboCop remake, then?" Well, I wouldn't remake RoboCop. Couple the fact that it's a remake along with the fact that it adheres to the proverbial "origins story" template, and there is pretty much no way to win with a project like this. The proper way to restart the RoboCop series would be to skip the genesis and simply devise what could almost be a sequel to the original film. And with an R-rating in place, too, because that's how you make a fucking RoboCop movie. Basically nothing was done right with RoboFlop, which should be tossed on the scrap heap and will not have the staying power of the 1987 flick. Saying it's not as bad as the Total Recall remake is about the faintest praise it can be given, frankly.