How beautiful life is... 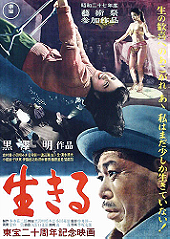 ''How tragic that man can never realize how beautiful life is until he is face to face with death.''

Kanji Watanabe is a longtime bureaucrat in a city office who, along with the rest of the office, spends his entire working life doing nothing...

Ikiru(生きる, "To Live") is a 1952 Japanese film co-written and directed by Akira Kurosawa. The film examines the struggles of a minor Tokyo bureaucrat and his final quest for meaning. The film stars Takashi Shimura as Kanji Watanabe.
Ikiru is emotionally effecting and intellectually engaging, and indeed deserves its reputation as a masterpiece regarding world cinema and should be included in any reasonable list of the one hundred greatest films ever made. 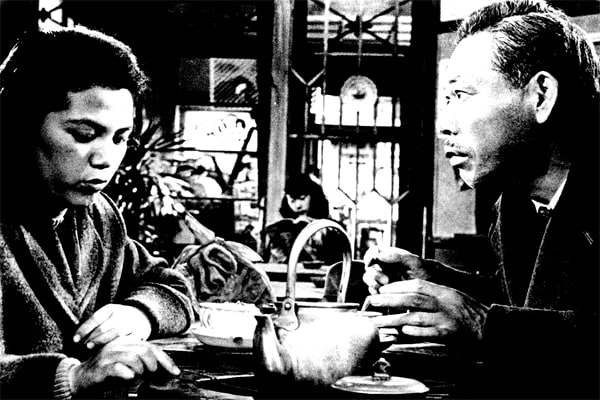 Ikiru is about a man who discovers he has a terminal illness, but the movie glosses over his physical suffering, instead focusing on the philosophical implications of his situation. The Japanese word ikiru translates into English as “to live,” and I see the film as being a thought-provoking meditation on what that verb should mean for a human being.
It is addressing life or the purpose of living: Kanji Watanabe, an aging man who works as a section chief at the incredibly bureaucratic Tokyo City Hall. For 30 years he has done little on the job except be present and shuffle papers. He is a lonely widower who is not close to anyone. A narrator tells us in voice-over that Watanabe is "simply passing time without actually living his life." But he soon realizes he has an illness that will kill him within a few months.
One of the things that impresses concerning Ikiru is its unconventional narrative structure. The first hour and a half takes us in a relatively normal encompassing through the Kafkaesque environment at City Hall, a night of debauchery in Tokyo’s vibrant amusement district, and a painful relationship between the dying Watanabe and a vivacious young woman. The film then surprisingly propels five months ahead to Watanabe’s wake, where the rest of the story unfolds like a mystery. We learn in flashbacks what Watanabe did during his last five months and some intriguing details revolving around his demise.

''I have less than a year to live. When I found that out... somehow I was drawn to you. Once when I was a child, I almost drowned. It's just like that feeling. Darkness everywhere, and nothing for me to hold onto, no matter how hard I try. There's just you.''

In the role of Kanji Watanabe, Takashi Shimura gives one of the most memorable performances by an actor in any film seen. Here Shimura plays an everyday man, and his expressive face and body language perfectly capture the terminally ill bureaucrat. Although to see why they call it acting, watch Seven Samurai, where Shimura portrays Sambei, a powerful warrior who leads the band of heroes that gives the film its title. The roles is a contrast and example on how wonderfully Shimura can change himself into any role.
Kurosawa is famous for his visual style, and it’s the images in Ikiru that remain: A jammed dance floor in a nightclub filled with a sea of dancers swaying to Latin music; Watanabe watching a toy bunny hop across a tea-room table; the face of a City Hall bureaucrat disappearing behind stacks of paperwork. Indeed, one of the most moving scenes in all of cinema is the one near the film’s end where Watanabe, alone in a small playground, swings to and fro amidst gently falling snow, softly singing “Life Is Brief.”

One of the film's best qualities is the superb direction by Akira Kurosawa. It is mesmerising that Kurosawa was able to make the character of Kanji, a bureaucratic paper-pusher the most well developed, interesting character in the story. That is not to say that all of the other characters in the movie are underdeveloped. Every role in this movie is expertly defined. Also, Kurosawa's revolutionary pacing makes the 140 minute runtime fly by, leaving the audience begging for more.
The cinematography by Asakazu Nakai is outstanding. Every shot in this movie is so well composed that any one of them could very easily be framed and displayed in a museum. Nakai's usage of lighting techniques and deep focus as methods of foreshadowing is unparalleled.
There is a strong anti-bureaucracy message in the film's underlining storytelling. In fact, this subtext later became the basis for one of the themes in Terry Gilliam's Brazil. In Ikiru, this sentiment is tragic as the poor people of Kuroe's petition for a park gets passed around from department to department after each employee decides that it is not their problem. Kanji is easily assimilated into the role of the hero when he makes the plight of the residents of Kuroe his personal mission and stops at nothing to see that the park is built.
Ikiru is one of the greatest films ever made. This is one of those experiences where there is not a single wasted moment or scene. Ikiru is as life-affirming, and equally as memorable as Frank Capra's It's a Wonderful Life. This film also shows that, while he is most popular for his masterful samurai epics, Kurosawa's entire body of work demands attention. Ikiru is one of his best achievements in film and an affirmed favourite for me.

Even upon first viewing Ikiru is easy to understand and yet it is not easy to understand; It is simply open to more than one interpretation. The ending is in some ways bleak: It looks as though Watanabe had no lasting impact on City Hall and before long he will be forgotten. Yet on the other hand, one poor Tokyo neighbourhood is given hope and a new lease of life because of his efforts.
The most important idea in the film is that Watanabe did manage to do something meaningful after his mortality's end is known, and it was only during this time that he could actually be said to live. He is alive. Watanabe has finally lived.

''Life is so short...Fall in love, dear maiden...While your lips are still red...And before you are cold...For there will be no tomorrow.''