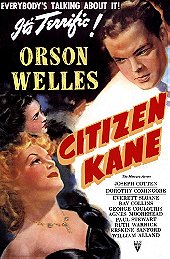 ''I guess Rosebud is just a piece in a jigsaw puzzle...a missing piece.''

Following the death of a publishing tycoon, news reporters scramble to discover the meaning of his final utterance.

Citizen Kane from 1941, has been lauded as the greatest motion picture to come out of America during the black-and-white era (or any era, for that matter). It also represents the pinnacle of Orson Welles' film making career. For, although Welles lived for more than forty years following the release of Kane, he never succeeded in recapturing the brilliance or fulfilling the promise of his first feature. 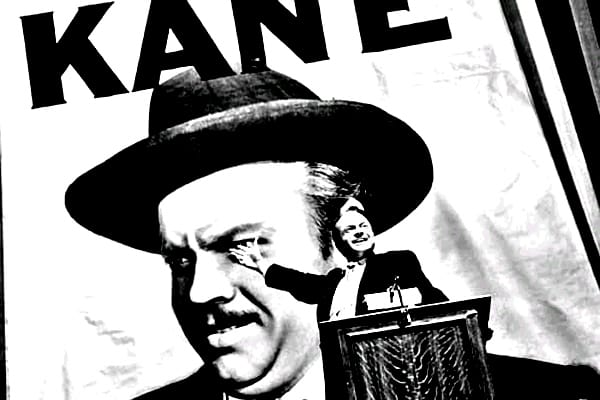 Some perhaps boast that his effort The Magnificent Ambersons was powerful, but the studio took the film away from him, slashing more than 40 minutes of footage. Thus, while Welles' Shakespeare movies and A Touch of Evil contain elements of brilliance, they are not on the same level as Kane aspires. It has been argued, most forcefully in Thomas Lennon and Michael Epstein's 1996 documentary, The Battle Over Citizen Kane, that Kane not only started Welles' directorial career, but nearly ended it.
The movie opens with an unforgettable image of a distant, fog-shrouded castle on a hill. It's a classic Gothic shot, and goes a long way towards establishing Citizen Kane's mood. We quickly learn that this place, called Xanadu, is the dwelling of America's Kubla Khan, Charles Foster Kane (Welles), a one-time newspaper magnate who could have become President if not for an ill-advised extramarital affair. Xanadu, in the words of the faux newsreel that gives a brief history of Kane's life, is the "costliest monument of a man to himself." Any resemblance to The Ranch, William Randolph Hearst's real-life San Simeon abode, is not coincidental.

''I can remember everything. That's my curse, young man. It's the greatest curse that's ever been inflicted on the human race: memory.''

Within moments of the film's eerie, visually-stunning opening, Kane is dead, uttering the word "Rosebud" as he hunches over. His death, like his life, is a big news event, and the paper he owned, the New York Inquirer, is desperate to unearth the meaning regarding his cryptic last word. Is it a woman he bedded? A horse he bet on? A beloved pet? Some long-lost, unrequited love? The truth, which isn't revealed until the closing scene, represents one of the all-time greatest motion picture ironies, and leads us to believe that, on some level, Kane regretted not having led a simple, quiet life. It is easily one of the simplest yet cleverest twists divulged by film and a complexly written story.

The script for Citizen Kane, written by Herman J. Mankiewicz (with an assist from Welles), is a thinly-disguised fictional biography of publishing king William Randolph Hearst, who was 76 years old when the movie came out in 1941. And, while Hearst was offended by Welles' characterization of him, he was supposedly more angered by Kane's unflattering portrayal of his beloved mistress, Marion Davies (who is represented in the film by Susan Alexander). To add insult to injury, "Rosebud" was allegedly Hearst's pet name for Marion's private parts.
Kane is not, however, all Hearst. There's more than a little Welles in the character, and, when one examines the direction the film maker's life took after Kane, the similarities become more obvious. After peaking with Kane, Welles began an slow-but-inevitable descent into isolation, eventually dying of a heart attack in 1985. Like Kane, he was a vital, passionate figure in youth, but a sad, pathetic one at the end. (Who can forget the Paul Masson commercials?) In retrospect, Kane can be viewed as being as much a representation of Welles as of Hearst.

Back in 1941, Hearst exerted his considerable power and influence to destroy Citizen Kane before it opened. He failed, but, even though Kane saw the light of day, Welles' young career (he was only 25 at the time) did not escape unscathed. A smear campaign in Hearts' papers branded him as a communist. Kane, nominated for nine Oscars, emerged with only one (best screenplay), and "boos" could be heard whenever the film was mentioned during the ceremony. And, before Welles had completed post-production, RKO wrested control of his next picture, The Magnificent Ambersons, from him.
As a film, Citizen Kane is a powerful dramatic tale about the uses and abuses of wealth and power. It's a classic American tragedy about a man of great passion, vision, and greed, who pushes himself until he brings ruins to himself and all around him. Of course, the production aspect that makes Citizen Kane so memorable is Greg Toland's landmark cinematography. In fact, it's impossible to have a serious discussion about this film without mentioning this element.

The movie is a visual masterpiece, a kaleidoscope of daring angles and breathtaking images that had never been attempted before, and has never been equaled since. Toland perfected a deep-focus technique that allowed him to photograph backgrounds with as much clarity as foregrounds (note the scene where Kane's parents discuss his future while, as seen through the window, the child plays outside in the snow). There's also an extremely effective low-angle shot late in the film where Kane trashes Susan's room. The cinematography documentary, Visions of Light, devoted an entire section to Citizen Kane. If any other film has come close to the nearly-perfect artistry of this one, I haven't seen it. Anyone foolishly wondering how black-and-white images could be superior to colour needs only to watch the first few frames of Citizen Kane to understand. Not only is it impossible to envision this picture in colour, the very thought is blasphemous.

There's no doubt that Citizen Kane was far ahead of its time. Uncompromising, unsentimental drama of this sort was not in vogue during an era that was better known for titles like The Wizard of Oz, Gone with the Wind, and How Green Was My Valley(which beat out Kane for best picture). In challenging Hearst, Welles forced a clash of egos that had wide-ranging repercussions. Yet, out of the conflict, Citizen Kane emerged stronger than ever. Would the film be as compelling if we didn't know how close it came to never being released? Or if we didn't recognize the parallels between the life of the main character and that of the director?
Is Citizen Kane the best movie ever made? Many critics would argue "yes" without pause, but my enthusiasm is more restrained. While I acknowledge that Kane is a seminal masterpiece, it is perhaps not the Best Motion Picture but definitely to be considered among them. There is no denying the debt that the movie industry owes to Welles and his debut feature. Motion picture archives and collections across the world would be poorer without copies of this film, which will forever be recognized as a defining example of American cinema.

''I don't think there's one word that can describe a mans life.''