Love - is the height 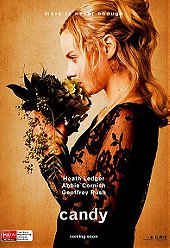 The next time I will say that I do not like drama and watch them very often ... But then again I admit that this genre often conceals an abyss of reality, meaning and causes reflection. And "Candy" is just one of those movies.

Films about drug addicts is not uncommon and there can recall a lot of examples, ranging from the comedy "Harold & Kumar Go to White Castle" and ending with the drama "Requiem for a Dream." And "Candy" is just very similar to the well-known film directed by Darren Aronofsky. "Candy" - it is also a film-warning, the film that shows the whole world of drugs and makes the viewer think again: And it do I need?

In the picture is the correct structure - it is divided into parts, but with the strict separation as such no, but the word "Paradise", "Land", "Hell" delimiting the story very clearly describe the state of the main characters of the film and what happens to them.

The picture is very real - watched the movie and sometimes it seemed that he looked in your own mirror, looking at what is happening in the streets, Bardel, parks, watching the passers-by and looked inside the characters into human nature, about how much he could fall and how unbearably hard for him to get out ... And in this incredible achievement actors, a brilliant duo Heath Ledger and Abbie Cornish. They both re-created this world (which is re-created, not created, because of this empathy to the role I do not often see on the screen), they discovered his audience in all its emptiness, darkness and fear ...