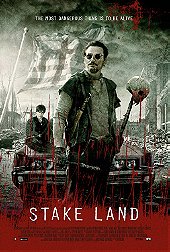 I love this movie, plot is talking about a post-apocalyptic America, all over the country spreads the plague of vampirism. Cities are tombs and survivors clump together in rural areas. When his family is killed by a vampire, the young Martin is saved by Mister, a vampire hunter, so the journey begins. Heading North.
They on-the-road living, and fighting, with other deviant humanity, obsessed by Jebedia Loven, a Reverend Jim Jones type, that will lead them to confront hordes of vampires, carrying the new order as Jebedia said. During the journey the odd duo find allies and other small fortresses made by survivors, but Jebedia, now turned on a sentient beast, is on the prowl. After a epic battle with Berserkers, vikings type vampires, stronger and smarter than the common bloodthirsty beasts, the small group of survivors, leaded by Mister, reaches the top of a mountain.
They felt safe, winter is coming, vampires are cold-blooded creatures, weakened by cold. Rage is fueling Jebedia's blood, and this time Martin saves Mister and finally kills the undead angel. The journey is near the end, when Martin and Mister approaching a survived teen girl, with huge crossbow skills. For Mister is time to leave Martin with the girl, to fight vampires again, and this will lead them to New Eden.
Nick Damici is Mister, as his best. Connor Paolo as the shell-shocked Martin does a very good job, veteran Kelly McGillis as Sister gives credibility to this movie.
2 thumbs up.