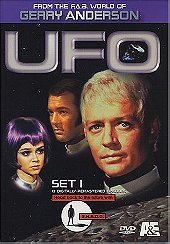 UFO is absolutely my favorite TV show of all time! So my review will NOT be impartial...


UFO is a British TV series about an alien invasion of Earth, in a dystopic year 1980,created by Gerry and Sylvia Anderson with Reg Hill in 1969, and produced by ITC Entertainment company, aired in 1970.
Earth is attacked by visitors from a far dying planet in the search for humans organs to transplant. SHADO is founded to defend Earth and humanity against the alien menace. Supreme Headquarters, Alien Defence Organisation is an international secret military agency, located in England beneath Harlington-Straker movie studios, with high technology weapons, a submarine fleet, a base on dark side of the moon. SHADO unleashes his own air force, space crafts and tanks division against the alien rotors to protect human race from becoming spare parts.
An Army of brave men and women, led by ex USAF Colonel Ed Straker, recruited by SHADO as pilots, mariners, astronauts or simply mechanized infantry, struggling every day with the invaders, an old alien race with telepathy and psychic powers.
The main cast of characters are Colonel Paul Foster and Alec Freeman, LTs Gay Ellis, Nina Barry and Joan Harrington from Moon Base, Captain Lou Waterman and Peter Carlin from Skydivers, Virginia Lake, later Colonel, of UTronic Project.
Last but not least Commander Ed Straker, leader of SHADO and General James Henderson chief of Astrophisics Commission, mentor of Ed Straker since the USAF call of duty.
In 26 episodes we have thrilling action, space odissey, left hand drive in England, submarine smashes and busty girls with big blue eyes...do you want more ?


I'm updating the descriptions on gallery pictures. So you will be able to recognize the places, the spaceships, mobile vehicles and personnel of SHADO.