Still not as good as the original 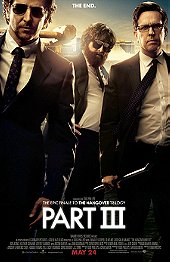 "Where is he? Leslie Chow stole twenty million from me, and I figure the Wolf Pack have the best chance of finding him! Doug is my insurance!"

Billed as the final entry in the Hangover franchise (though the box office will likely dictate further pictures), 2013's The Hangover Part III is another sequel which fails to live up to the hit film that spawned it. Although there is a certain hate train for 2009's The Hangover all these years later, it holds up in this reviewer's eyes; it's a riotously funny and refreshing R-rated comedy with high replay value. And now four years on, Part III is a slight step in the right direction following 2011's disappointing part deux, and it does deliver a few quality gags throughout, but it's underwhelming as a whole. Ultimately coming up short in terms of laughs, Part III crosses the line too often, becoming pointlessly black and cruel whereas the 2009 film supplied heart and a good-natured spirit. 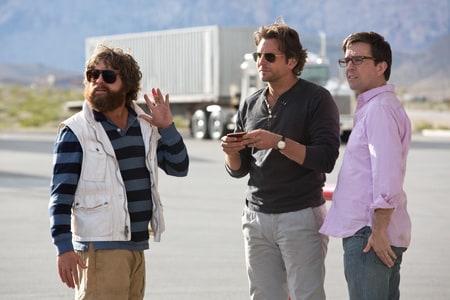 42-year-old man-child Alan (Zach Galifianakis) has hit a rough patch. Still living at home with no job prospects and no girlfriend, he also becomes tabloid fodder following a freeway accident, and his father (Jeffrey Tambor) dies from a heart attack. An intervention is set up involving his mother (Sondra Currie), brother-in-law Doug (Justin Bartha), sister Tracy (Sasha Barrese), and pals Phil (Bradley Cooper) and Stu (Ed Helms), looking to convince Alan to agree to rehab. En route to the clinic, Alan and his Wolf Pack are attacked by crime lord Marshall (John Goodman), who kidnaps Doug as a bargaining chip while he sends the rest of the boys to track down recent prison escapee Mr. Chow (Ken Jeong). It turns out that Chow ripped off Marshall to the tune of $21 million, and now he wants to exact revenge on the cocaine-crazed Chinese gangster.

Part II was justly criticised for rehashing practically every narrative beat of its predecessor, and it seems Phillips took such criticisms to heart while embarking on this second sequel. Thus, Part III heads in a whole new direction, only retaining the conceit of Alan, Phil and Stu setting off together on a mission, thus smartly avoiding the blackout gimmick of the previous films. In fact, there's no hangover here at all, and only minimal drinking; the hangover of the title actually refers to the events of the original film, as Part III is intrinsically tied to the 2009 picture, bringing back a few characters and even delving further into the life of Black Doug (Mike Epps). It's fun to check in with a few returning characters, including the infamous baby from the original film who's now walking and talking. Black Doug, though, is pretty much betrayed to his very core here, going from an amusing presence to a nasty prick without appropriate motivation. 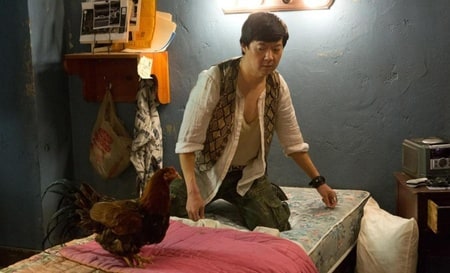 The Hangover was almost line-by-line hilarious, with belly-laughs in every scene. The screenplay was genuinely witty, and it's likely that Phillips and the actors only made it funnier. Part III fails to live up to this; the script (by Phillips and Part II writer Craig Mazin) makes things less fun and more callous. In fact, it's a needlessly dark movie which is only sporadically funny, focusing less on laughs and more on the adventure. I understand the need to do something different after Part II, but the execution is lacking; while it's skilfully-assembled with first-rate technical specs, Phillips rarely overcomes the lacklustre script. The first film was a string of hilarious and memorable set-pieces - Alan's speech on the rooftop, the scenes with the cops, Chow emerging from the boot - but Part III cannot compete. Although some moments work, others are less successful, including the sight of a chicken being smothered with a pillow that is far less amusing that it sounds. Added to this, the pacing is a little awkward at times; it stops and starts, and seldom maintains much momentum.


Alan was Galifianakis' breakout role back in '09, as it was a genuinely iconic performance. Alan was dumb but endearing, and Galifianakis played the part to perfection, turning a potentially one-dimensional role into a brilliant comedic force and a surprisingly believable moron. Here, Alan is more of an arsehole than a charming idiot, and his stupidity often feels forced. One does not feel as inclined to hang out with this guy anymore, and that's a problem. Alongside him, Helms and Cooper still do not have a great deal to do beyond leaning on their usual shtick. They're still solid in their roles, but there's not much for them to chew on. Meanwhile, Bartha, as usual, has absolutely nothing to do. It's disappointing that he yet again spends most of the movie out of the picture; it would've been nice to see him actually join the Wolf Pack at long last. More successful, though, is the supporting cast. Jeong scores a number of laughs as Chow, while Goodman sinks his teeth into his antagonist role. But it's Melissa McCarthy who steals the film. McCarthy is only in a handful of scenes, but she gives the movie a spark of life, and her interplay with Galifianakis is outstanding. Less memorable, though, is Heather Graham who returns for one scene simply to help with some exposition. 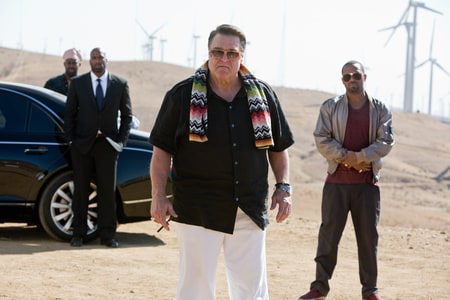 Like its immediate predecessor, The Hangover Part III works in pieces rather than as a whole. While it remains watchable and does some interesting things with the characters, only occasionally does it display the type of charm and creativity we saw in the original film. The Hangover now feels analogous to The Matrix; the first film was strong, earning insane box office receipts and unexpected critical praise, but the follow-ups feel unnecessary and disposable. Unfussy Hangover fans will still have some fun with Part III, but it isn't essential viewing for casual movie-goers. Oh, and be sure to stick around for an extra scene a few minutes into the credits.