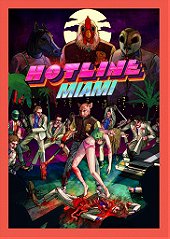 Hotline Miami is psychotic, blisteringly psychotic, but yet subversive enough to penetrate through the fourth wall and have you questioning why, in fact, is this game so fun? The gameplay mechanics are simple: you come to the front door with a mask on and murder everyone. It varies in complexity, as the game gives you a healthy variety of tools with which you can use to make with the red splatters, and rewards you for utilizing your options with new mask choices--each one granting its specific boon. My favorite was Don Juan, the horse mask, granting me "Lethal Doors." In I would charge, typically getting gunned down or having my brains bashed in within seconds, and seconds later trying it again, only slightly different. You can get caught in loops where the same enemy kills you over and over and you insist on keeping the same pattern because it has worked so well until that point and you realize... well, maybe I should say I realized, that the whole thing seemed rather psychotic in nature, but why is it so fun?

"Why did you come back here? You're not a nice person, are you? You make me sick!"

The story lends the whole gameplay element about as much credulity as a handshake from a banker. But that is why it works so well. "Jacket," our unnamed player-character, is seriously unhinged from the start, living alone and, we learn, following instructions left on his answering machine.

"It's 'Dave' from Miami pest control. We need you. A client at SW 104th Street is having vermin problems. Try to handle it as quick and swift as you can. Someone else will clean up for you after you leave. Make sure not to bother any of the neighbors."

How curious our method is of "following instructions." However, Jacket has hallucinations, or maybe flashbacks, of three masked people sitting around him, asking him hostile questions, predicting the future with certainty, and generally being bizarre, which certainly doesn't explain anything, but it does add a bit of clarity to the situation. You are psychotic. All the neon colors, the pulsing retro techno buzz, the blood, the free handouts at every store you go to, the puking in the alleys. You start to see the people you've killed again, grotesque sinkhole foreheads dripping on the carpet. And then you die. Or maybe you don't. And then, once you've beat the game, it almost makes sense that the story is not over, and that you must play as someone you've killed. It would be easy to trust this "Biker" over Jacket, but when the final blood is spilled, it puts everything into question. Why did Jacket and Biker keep following the instructions on their machines? Could the whole thing really just be a couple kid's nihilistic game? Why is this game so fun?

"A picture is starting to take form here... I wonder if it's accurate. Some pieces don't quite seem to fit. Or maybe I just don't like the way it looks."

Hotline Miami manages to hook you with the one-more-try mechanic and a promise of an unforgettable fever dream of feral fantasy. Soak in this inspired indie game. Enjoy the brutality, enjoy the style, but most of all--enjoy the music.