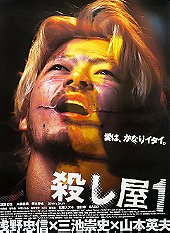 This is one of the goriest films I can quickly recall. It's known worldwide for the gore and violence in it. But it also is one of the most hilarious comedies I've seen in quite a while. Ichi works on two levels: A sick, twisted movie with violence and nudity in it brought together by a relatively meaningless plot for some. This works for the casual viewer, and if that person isn't an old lady with a wig, s/he will propably enjoy it aswell. But then there's the other level: Ultra dark comedy. It is occasionally far too hard to see beyond the visual feasts we're presented with on-screen, but if you manage to do so, you can see that below the surface this movie has a hilarious overtone to it. One of the best examples would be Ichi's self-claimed master, an old man called Jijii. In the last third of the movie, he takes off the coat he has been wearing all along the movie; below we see the equivalent of the body of The Governator. Then he proceeds to snap a man's neck in half. Some people propably wouldn't laugh at that, since the killing of a person. But the murder isn't the point; the kill is simply used to present the man's power. It's all done within context, just as all the violence and nudity in this movie; the story requires it.

Why, you may ask? Because Ichi gets some serious character development here. He was bullied as a child (there's a huge twist to that which I will not reveal), and so he kills other people; crime lords, goons and other bullies because he is so filled with anger towards all the evil in this world that he must take it out on something. Anyhow, he has some serious ejaculation problems, and after seeing a man beat a prostitute up and then have sex with her, he gets a boner... I won't actually reveal anymore, but the screenplay worked almost perfectly with Ichi's character, and Nao pulled the role off perfectly. Still, Ichi is no reason to watch this movie. The true reason is Asano's spectacular portrayal of Kakihara, the coolest masochist in the history of cinema. The man is almost the embodiment, or an epitaph of coolness. His character remains somewhat the same throughout the movie, but his witty dialogue and great performance make up for it.

Enough with the acting though, let's get to the rest of the crap: Miike is a great director. He uses flashbacks in a great way here, and pulls off some really impressive and original camera work. He really takes all the juice out of the wonderful screenplay, and some of the gore we see here is so sick that you need to laugh in order not to cry. I really don't have much else to say here... this is a great movie, even though it does tend to stir up too much violence on occasion. Still highly enjoyable, and fun to see.