"When are you gonna grow some balls, mate?"

One of the most disturbing serial killer cases in Australian history, the Snowtown murders - or the "bodies-in-barrels" killings - were perpetrated in the late 1990s by John Bunting, Jamie Vlassakis, Robert Wagner and Mark Haydon. Between them, twelve people were tortured and murdered, and their corpses were disposed of at various places around South Australia, most notably in a disused bank vault in Snowtown. Contrary to what some may assume, Snowtown was just the location where a lot of bodies were kept - the grizzly murders were actually carried out in the lower class town of Salisbury North. 2011's Snowtown is a dramatisation of the chilling murders, and it is not a film for the faint of heart. Directed by first-timer Justin Kurzel, this is a bleak tale of murder, abuse and manipulation, and it's entirely without a positive angle or a redemptive arc. Snowtown is one of the most nihilistic and horrific Australian movies in history, yet it is also a compelling masterwork which benefits from excellent filmmaking and stunning performances right across the board. 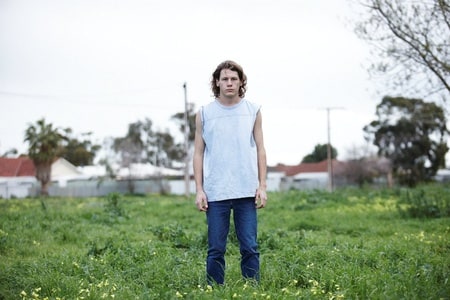 16-year-old Jamie Vlassakis (Pittaway) lives with his mother Elizabeth (Harris) and his two younger brothers in their dingy Adelaide home. When Elizabeth leaves her sons with a friendly local, he sexually abuses the boys, traumatising the family. Into their lives soon comes the confident, charismatic John Bunting (Henshall) and his gang of mates, who torment the local paedophile into moving out of the neighbourhood. This sparks a crusade of sorts; Bunting and his cronies are disillusioned by the inherent failings of the criminal justice system which is too lenient towards perpetrators of child abuse, and want to do something about it. Bunting sets out to murder anyone he deems a threat to children, but he cannot distinguish between paedophiles and innocent homosexuals, and he becomes determined to slaughter anyone vaguely suspicious of being one or the other. Meanwhile, Bunting emerges as a father figure to Jamie, grooming the young teenager to do his sinister bidding.

Jamie sees John Bunting as somewhat of a saviour for his family, and, at first, so do we. After all, Bunting is a charismatic presence, and he puts food on the table and bonds with Jamie. It's easy to root for Bunting as he encourages the kids to vandalise the house belonging to the paedophile who abused them, even though it's morally wrong. But Bunting is more sadistic and sinister than he lets on, and he transforms from kitchen table ranter to irrational serial killer. It's hard to describe the effectiveness of Snowtown. Utterly harrowing, it's packed with scenes and images that will haunt you for a long time. This is thanks in large part to director Kurzel's matter-of-fact filmmaking approach - the movie is not glossy or stylised; it's disturbingly raw. Atmosphere, too, is spot-on, as it feels like the movie genuinely takes place in lower-class Australian suburbia during the 1990s. 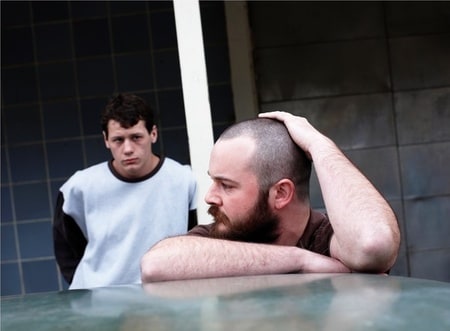 For the most part, we do not see the murders. Instead, the killings are implied; we hear answering machine messages from the victims to loved ones or friends explaining that they are leaving for a few months, or permanently moving. See, in order to cover his tracks, Bunting forced his victims to record such messages before he killed them. Once this becomes clear, it's a chilling and brilliant nuance. Only one murder is seen in full detail, and, heavens me, it's disturbing beyond belief. Saw and Hostel are palatable due to their shallow, mainstream nature, but Snowtown feels uncomfortably real, as if Kurzel filmed real-life torture. Kurzel does not depict the violence in an exploitative or enjoyable way, since this is not torture porn for entertainment; Snowtown is bleak filmmaking which uncomfortably portrays the horrors of these killings. It is literally hard to watch from time to time. The film additionally benefits from Adam Arkapaw's stark cinematography, and the pounding, harrowing score by Jed Kurzel.

Snowtown is somewhat unconventional in its narrative approach, hardly focusing on the machinations behind the murders. One can't help but wonder if a more linear approach might have worked better, since a lot of compelling details about the case were omitted. For instance, the police eventually started investigating Bunting, and he had trouble finding places to store the barrels. This led him to store the barrels in the Snowtown bank vault. The film also gives us the vague sense that Bunting killed people on the flimsiest of evidence, but could have done a lot more with it. And hell, in real life, after slaughtering their final victim, Bunting and Wagner fried and ate a piece of said victim's flesh. Morbid details like this would have tremendously amplified the picture's power. Furthermore, Shaun Grant's script introduces too many new characters too soon, not giving us the chance to properly acquaint ourselves with Bunting's partners in crime. A few plot developments are too vague as well, and the film is occasionally confusing. Make no mistake, the film's narrative structure works on its own terms, but it just feels too underdone. 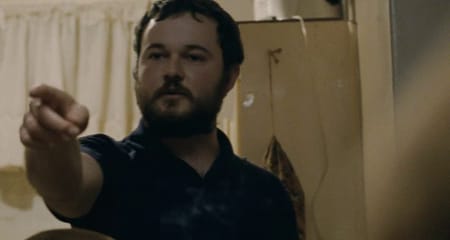 Without a doubt, most of the movie's power is thanks in no small part to the performances. Except for one or two of the performers, the film is inhabited by non-actors who were literally pulled off the street. You wouldn't know it, though, since the acting is spectacular. Daniel Henshall is most notable as John Bunting. Bunting is a warped psychopath and a stone-cold killer, but it's possible to almost forget this fact during the first act of the film due to Henshall's incredibly nuanced and restrained portrayal of Bunting. Henshall's performance is sensational; he has created one of the most powerful and disturbing characters in recent cinematic memory. Lucas Pittaway is equally remarkable, playing Jamie Vlassakis as a naïve boy unwillingly sucked into a cesspool of killing and nihilism.

Snowtown will shake you to your very core; it's a highly confronting film that's hard to watch and impossible to forget. Most will find it too bleak and depressing, and simply will not be able to watch it. However, those with patience and endurance will be rewarded with remarkable acting, vivid direction and exceptional filmmaking. No, this is not the definitive story of the murders, and you'll learn a lot more about the full story by watching a documentary. Snowtown is, however, a harrowing dramatisation.