Mainstream Thriller-Making at its Best 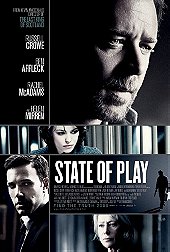 "You're just seeking the truth. You're a truth seeker. You can't help it, that is just who you are. You're such a hypocrite. You're not interested in me. You come in here, it's all about you and you getting your story. I trusted you. You're my friend! You were supposed to be my friend anyway."


By and large, remakes are superfluous. At face value, a Hollywood remake of the BBC mini-series State of Play is extremely superfluous. The intricate plot of the mini-series was weighted perfectly over six gripping hours of television, and its theme (centring on the corruptibility of people in power) was all tied to its Westminster setting. So why shift the scene to Washington, D.C. and adapt it for the big screen? The answer relates to Hollywood's compulsion to remake every good story in its own image (and to get maximum profits from minimal effort). But in this case there's further justification for a remake - since 2003, the state of play has changed in relation to newspaper journalism, and this is pushed to the centre of the frame in 2009's State of Play. In adapting the BBC mini-series for the big screen, the filmmakers have achieved something remarkable: they've condensed the meaty intrigue and thrills within six hours of material into two snappy hours, and still produced a coherent and engrossing film. A study of political power plays, calamitous sexual impulses and the twilight of printed journalism, State of Play is riveting, sublimely acted and smart - it's mainstream Hollywood thriller-making at its best.


The plot primarily concerns the seemingly accidental death of Sonia Baker (Thayer); the research assistant and secret lover of rising Congressman Stephen Collins (Affleck). The night preceding Sonia's death, a petty thief and a pizza deliveryman are shot dead in an alley. Hardened journalist Cal McAffrey (Crowe), who works for a deteriorating Washington newspaper, suspects these apparently unrelated deaths are part of a conspiracy waiting to be uncovered. Sharing a personal history with Stephen Collins and his wife Anne (Penn), he becomes conflicted over the type of story he wants to tell. Cal teams up with political blogger Della Frye (McAdams) and begins uprooting clues that implicate a murky corporate web of cover-ups, insiders, informants and assassins.


Despite a labyrinthine, multifaceted storyline, State of Play is rarely confusing and continuously engaging. It contains an intriguing plotline bursting with twists - and because it's so intriguing, a viewer will be on the edge of their seat awaiting the next big reveal. It's confident and masterful storytelling, handled by a team of excellent screenwriters: Tony Gilroy (Michael Clayton), Billy Ray (Shattered Glass) and Matthew Michael Carnahan (The Kingdom), each of whom draws on the thematic interests that fuelled the best of their previous movies (corporate abuse of power, journalistic ethics and Iraq-war-era government, respectively). Uncredited work on the script was also carried out by Peter Morgan of Frost/Nixon fame. State of Play is vehemently plot-driven, with conversations typically used for exposition rather than character development. However, thanks to both the acting and the screenwriting, virtually every character is given a satisfying degree of depth and dimension. Dialogue is crackling, sharp and at times utterly spellbinding.


Director Kevin Macdonald (The Last King of Scotland) competently orchestrates the movie, and is particularly adept at generating tension. Contributions across the board are sound, from Rodrigo Prieto's gripping, muted cinematography to Justine Wright's crisp editing and Alex Heffes' pulse-pounding score. There's no question that State of Play at times feels abridged, with an inability to capture the true density of the original BBC series (then again, what two-hour movie could?). Some of the intricacies and subplots are missing, but surprisingly little has been lost that actually mars the narrative structure, and the story unfolds with brilliant, riveting urgency. It doesn't shy away from the occasional bit of Hollywood hokiness, but by no means is the story transformed into a brain-dead product for the action market. Its target is mature adults - the ADD-inflicted teenage crowd are advised to stay clear.


State of Play is a thriller about conspiracy, murder and politics, but it also shines as a statement on the ostensibly inevitable demise of print media in favour of online blogs and cable news that post every story (or some version of it) the moment it happens. Some would argue that a very important brand of journalism is dying along with newspapers - Cal McAffrey is a genuine, old-fashioned reporter who takes days to write an article, thoroughly examines both sides of the story, refuses to rely on sensationalism and hearsay, and prefers to be right rather than first. This causes him to have a slightly antagonistic relationship with his editor (Mirren) who admires Cal's morals but knows the paper has to make money or perish (with all other considerations secondary). State of Play is an old-fashioned sort of thriller - solid, patient and thoughtful - so it's hardly surprising that it finds heroics in Cal's dogged brand of journalism. There's a definite elegiac quality to this film; particularly accentuated by an end credits montage that lovingly lingers on the process of newspapers being printed.


The acting is magnificent right down the line. Crowe works exceedingly well in the role of Cal McAffrey (it's difficult to imagine Brad Pitt in the part, who was originally cast), and the actor submits his finest work in years. But the biggest surprise is Ben Affleck, who offers his best work to date. It's a nuanced, wistful performance that proves the actor still has some skill left in him (though it's difficult to accept Crowe and Affleck as college roommates). Rachel McAdams holds her own with Crowe in every scene (a real accomplishment), and plays Della Frye as callow but not cynical. Wisely, the relationship between Della and Cal is not a romantic one. Helen Mirren is marvellous as the newspaper's editor (a role originally played by Billy Nighy). She chews the scenery without ever going over-the-top. Jason Bateman deserves a massive kudos for his brief but pivotal role as the scumbag who becomes the linchpin to the entire case. Robin Wright Penn is her usual brilliant self as Anne Collins, while Jeff Daniels the Harry Lennix add their immeasurable professionalism to a couple of important peripheral characters.


All things considered, State of Play is a rare, top-notch thriller that cares about story and characters rather than high-octane action or sex. There are downsides to the overall endeavour (the film feels underdone and truncated, the final twist is clichéd, and the reveal of corporate skulduggery seems far too easy), but in an environment where dumb thrillers outperform the smart thrills by wide margins, we must be thankful to witness a thriller of this standard entering the multiplexes...even if it is a remake.