An intense but flawed finale. 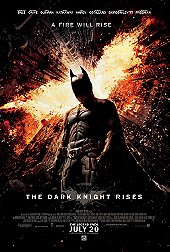 After four long years of waiting, the third and final instalment in Christopher Nolan’s Batman trilogy has finally been unleashed. Prior its release, The Dark Knight Rises had already received exceedingly high expectations from audiences following Batman Begins in 2005 and most of all - The Dark Knight in 2008. However, it is a third in a trilogy and not all films at that stage came out on top and, therefore, did not always provide an exciting climax that was expected. Furthermore, it needed to live up to the huge success of its predecessors and the build-up leading to this culmination. Thus, there was clearly a lot that we, the audience, were expecting from The Dark Knight Rises. Still, it managed to be more than satisfactory conclusion to an overwhelmingly popular trilogy but had certain flaws where it could have been a lot better.


Director Nolan had already illustrated his own stories of the Caped Crusader within Batman Begins and The Dark Knight, and had also used his own realism style of filming to create a different background atmosphere of Gotham City. Considering this, Nolan was in the situation where he needed to grasp the concepts within Batman Begins and The Dark Knight and merge all them together in order to create the ultimate conclusion that’ll become the icing on the cake, so to speak, within the trilogy. The re-introduction of the world of crime and the more realistic and modernized city of Gotham were the closer relations to The Dark Knight. On the other hand, the more in-depth personal development of the characters edged nearer to Batman Begins. Throughout all three films, Nolan presented something different to the table but The Dark Knight Rises is the most flawed and weakest instalment. At times, it was very slow paced and over-long that resulted in flat segments that loosened the connection with its predecessors and it included some shocking plot-holes that weakened The Dark Knight Rises even further. Despite this, we have established that it was still beautifully filmed. It was just the problems within the story and the script.


Christian Bale returned for the third and final time as Bruce Wayne/Batman. Throughout each film, we saw Bale fit into the role in different ways: an emotionally confused but very fit and gradually fresh in Batman Begins, which he maintained in The Dark Knight and improved his wealth but appeared even more vulnerable. However, because The Dark Knight Rises is set 8 years later, Bruce is older and is not who he used to be. The audience got a more personal and courageous outlook on Batman where he was considered the underdog against Bane and his forces. Nonetheless, Christian Bale will remain as the most realistic and heroic Bruce/Batman. Michael Caine reprised his role as Alfred who delivered the most natural performance in the entire film with a lot of raw emotional feelings, which added a sense of innocence. Morgan Freeman and Gary Oldman made their returns in the roles of Lucius Fox and Commissioner Jim Gordon just as Liam Neeson and Cillian Murphy returned in cameos.


Once again, another group of actors and characters were introduced into the Batman franchise. Previously performed by Michelle Pfeiffer in Batman Returns, Anne Hathaway took on the role of Selina Kyle/Catwoman. Hathaway, who was an underestimated choice, literally became Selina Kyle as she perfectly fitted into every emotional and physical aspect of the character. She was scheming, mysterious, badass and sexy. In the role, Hathaway provided something new that we hadn’t seen before: she was not seen entirely as Catwoman. She was simply Selina Kyle. This gave her a more natural touch as a human being rather than a comic-book superhero. Hathaway perhaps deserves a chance in a future Catwoman spin-off. However, there was the awkward romantic connection created between her and Bruce/Batman but, quite frankly, was it even necessary? Furthermore, Tom Hardy portrayed primary antagonist Bane, Batman’s next enemy in a much more physical role as opposed to previous enemies Scarecrow, Na’s and the Joker. Like Heath Ledger as the Joker, Hardy went beyond what we expected from Bane in The Dark Knight Rises. Hardy forged a terrifying, psychotic voice and due to the mask, he was almost literally acting with his eyes alone. His physique does not quite define the original comic book character’s appearance but, like Selina Kyle, he is expressed as a very strong, powerful person with a past. Finally, like Hardy, Joseph Gordon-Levitt and Marion Cotillard reunited with Nolan following Inception as they made their presence known in very up-close and personal but gradually very crucial roles too.


Overall, The Dark Knight Rises is, despite its flaws, a very intense finale to a trilogy that became a breakthrough in comic book adaptations and has become an inspirational influence within a generation. In certain ways, The Dark Knight Rises goes somewhere that hadn’t been seen in a Batman film before – it could go as far as to bring forth tears from the audiences. If there is to be yet another reboot in the upcoming future featuring the DC Comics hero, his colleagues and enemies, best of luck to them to even coming close to surpassing this trilogy.