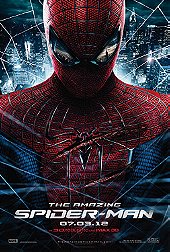 A lot of superhero movies are guilty of focusing too much on the action/special effects department while neglecting the human/emotional aspects of the plot. Curiously, The Amazing Spider-Man often feels like it's guilty of the reverse. Three years ago, director Marc Webb accomplished something truly extraordinary with (500) Days of Summer, easily one of the best romantic comedies of our generation. I actually thought there was a chance that Webb would be well-suited for a Spider-Man movie, because of several touches in (500) Days of Summer that gave that movie a lively and nimble pace that would be right at home in a superhero movie, especially one in which the plot's romantic element is so pivotal. Unfortunately, while The Amazing Spider-Man does a perfectly decent job at portraying the struggles experienced by Peter Parker the human being, it doesn't fare nearly as well in its depiction of the adventures of Spider-Man the superhero. There's a lot of effective comedy (particularly during the first hour) and a few moments that manage to be emotionally affecting, but when it comes to the action sequences and to the build-up of suspense, Webb doesn't fare nearly as well. Consequently, the latest cinematic attempt to resurrect a Marvel superhero is sufficiently engaging and worth caring about (even for a running time of 2 hours and 16 minutes), despite not succeeding all that greatly at providing the meat and potatoes of a summer blockbuster.

I really wanted to avoid turning this review into some form of comparative essay... but that's proving to be a little complicated. You see, even though Hollywood has been on a spree of remakes, reboots and sequels for years now, The Amazing Spider-Man is actually the first film ever to make me feel OLD. That's because it's impossible (for me, at least) to evaluate this movie without considering Sam Raimi's version of the web-spewing hero, which came out only ten years ago and was followed by two sequels. Spider-Man (2002) was a wonderful film, probably as good as superhero origin stories can get. Now, Spider-Man 2 (2004) holds a sacred place in my movie heart. It's a ravishing, monumentally amazing superhero film, entertainment at its apex, and one of the finest juxtapositions between action and emotional conflict that I've seen in any summer film. Spider-Man 3 (2007), on the other hand, is one of the most disappointing moviegoing experiences I've ever had - it's the only film that's ever made me want to laugh and cry at the same time, and not for any good reasons - I saw the film only once, but it left me so traumatized that there's even one particular scene of the movie that I still remember vividly due to how much it made me cringe. The good news is that The Amazing Spider-Man is definitely better than Raimi's final foray into Spidey's world. But it never gets even close to matching the immensely entertaining experiences that were the 2002 and 2004 films. We care for Peter and we feel his pain when he's picked on at school. There are hints of greatness in the dialogue during the scenes between him and his love interest, even if the romantic spark doesn't always ignite as powerfully as it should. But in this day and age of Avatar and The Avengers, the action sequences and CGI effects in The Amazing Spider-Man are shockingly lackluster and unexciting. They're not bad; they're just not very interesting. The bar has been set too high in this department, because of several of the other superhero films that have been released in recent years. Rarely did I feel a heightened sense of suspense or that the stakes were severely high or that I was having an eye-popping experience during the action scenes of The Amazing Spider-Man. To make matters worse, the movie features a villain who's rather monotonous from the very second we meet him, and who doesn't really grow into much of a spectacular threat. (I would've paid to see New York City swarming with human-sized lizards and Spider-Man having to take them all on, but no such luck).

There's only one reason why, in spite of the flaws I've mentioned, The Amazing Spider-Man is still worth a passing grade: Andrew Garfield. Because of my love for Raimi's first two films, it's a little bit difficult for me to admit this, but I have no doubt it's the truth, so it's my responsibility as a reviewer to say it - Garfield is an exponentially better actor than Tobey Maguire, and embodies the role much more effectively. It's actually only after seeing Garfield's work that, in retrospect, a lot of the problems with Maguire's performance start to surface (some fairly ridiculous wide-eyed stares, a general inability to cry convincingly). Garfield portrays Peter Parker's mixed feelings and general fucked-up-ness to perfection. Peter's moments of apprehension when interacting with Gwen and his inability to figure out the right thing to say are all played extremely well. This wasn't a surprise for me - most people only know Garfield from his very good turn in The Social Network, but haven't seen his devastating, heart-stopping performance in the extraordinary British film Boy A, but I can guarantee that Webb saw him in that film and knew he had his Peter Parker immediately. Emma Stone is good as the love interest, though a bit constrained by the fact that she's playing a character who, despite having plenty of screen time, doesn't enjoy nearly as much actual character development as she deserved. (On an unrelated, superficial note, I truly think that Stone's infectious, spunky charm registers much more when she's got a red head of hair. Yes, I know the Gwen Stacy character is supposed to be blonde. But I'm just sayin'.). At the very least, if there are sequels, we can be confident in that the young actors playing the protagonists are definitely more than capable of sparking on-screen greatness. It's all a matter of making it feel like there's more at stake for their characters.

Webb clearly has no problem with mixing drama and comedy efficiently or with getting us to care for his characters. But he needs some help if he also wants to dazzle us with the wallop of jolts and thrills that superhero films are obviously supposed to bring forth to audiences. Blame it on the awesome, gargantuan spectacle that was the recently released The Avengers, but The Amazing Spider-Man simply doesn't feature the requisite amount of unabashed excitement that we look for when go to a multiplex on the 4th of July. One of the local film critics here commented on a radio show that he felt that Raimi gave us the better Spider-Man, whereas Webb has given us the better Peter Parker. That observation may not be too far from the truth, but like I said, a lot of the credit for that goes to Garfield, for giving such a courageous performance. Incidentally, I should mention that the audience who watched the film with me applauded heartily when his name came up during the credits (can't say they did the same after the traditional post-credits scene, which is one of the lamest of those I've seen in a very long time). The craze and hype over superhero movies is at an all-time high, so the fact that The Amazing Spider-Man is a decent film that doesn't live up to its titular epithet may render it disappointing to those who have really high expectations. I liked it well enough, and the possibility that it might get better in future installments, with Garfield continuing to inhabit the role so well, is enough for me to say that I'd still give a sequel a try.