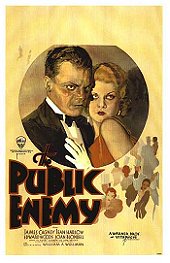 There was no real doubt that 'The Public Enemy' would be great. There were many great gangster films at the time that far from played it safe and were actually remarkably bold. William A Wellman was always great at taking difficult and quite heavy stories and giving them a sensitive yet packing a big punch while not pulling back in any way. Have for a while really liked James Cagney and it was interesting to see him in the film that shed the image that he had before taking on tougher roles.Luckily, 'The Public Enemy' did not disappoint. Wellman did a lot of fine films in the 30s and 'The Public Enemy' is absolutely one of them, one of the best. It is a great representation of Cagney, who shows perfectly why these sort of roles suited him so well, and of gangster films at the time. Showing that they were as gritty and bold back in the 30s as the more deliberate but still enthralling ones still being made 30+ years later, prime examples being the first two 'The Godfather' films and 'Goodfellas'.My only complaint is that it is agreed that the undergoing of the brother's personality was on the far-fetched side.Everything else though works absolutely brilliantly. The photography is continually clever and stylish with lots of atmosphere in how it's lit. The dialogue really crackles in sharp wit, tautness and intensity. There is nothing sentimental about the story, it is still as tough as nails and actually think that the daring edge has not been lost and it doesn't feel tame. It is suspenseful and is fast moving, racing along pretty much, without being too hasty and nothing feels confused.Particularly unforgettable is the justifiably famous grapefruit scene, a scene that one is shocked that it was filmed in the first place and made it in. Wellman successfully keeps the suspense going and as ever his pulling no punches approach to bold material is admirable.Characterisation is interesting, with one heck of a meaty lead character. Actually thought that the supporting cast were good, but Cagney, in a breakout role that transformed him from song and dance man to ruthless tough guy, is in a completely different league in a staggeringly powerful performance.On the whole, great and would even go as far to say that it's a near-classic. 9/10