Review of The Pacific 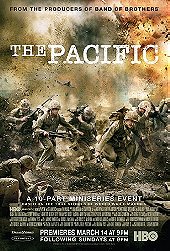 Warning: Spoilers
Ostensively, this follows 3 marines and their individual stories in the Pacific during WWII. Bob Leckie (James Badge Dale) is a small town reporter who join the marines at the start. Eugene Sledge (Joseph Mazzello) is a 90 pound weakling whose parents are reluctant to allow him to join. John Basilone (Jon Seda) comes from an Italian family who becomes a famous war hero.

Right off the bat, this must be compared to 'Band of Brothers'. While they are both WWII mini-series focused on the soldiers, they really hit on two different tones. BoB is more patriotic, more action oriented, and the story flow with a natural climax. This one still has the overwhelming action but it's muddier, grittier, and uglier. At times, this feels like a Vietnam war movie or a tough Korean movie. Unlike BoB, the last episode of this series is possibly the most emotionally tough. BoB can be an adventure thriller at times but 'The Pacific' is always a psychological grind. The only problem I have is the third episode where they spend the whole episode in Melbourne. It has some interesting stories but it's a waste to spend the whole episode there. Leckie gets a girl but they don't even stay together. For most of the Pacific, there are some great stories and impressive action. It's just a different style of war TV show.