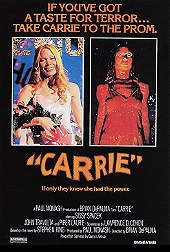 Warning: Spoilers
I'm on the fence about this movie. I think the premise is excellent. Watching Sissy Spacek grow into her role is great. She is no one dimensional character. As she is persecuted by her classmates, we grow to like her, not because she is a victim, but we get to see that she is more than a caricature. She tries so hard to deal with all the pain that she has in her life When she is taken to the prom by Tommy, he has genuine motives toward her. Of course, it's a setup, but that's OK. He is still a trouper and doing everything he can to make this night a nice one. He's never in on the joke. I tend to go along with the general criticism That is, if one is going to have vengeance as a motive, we need to know precisely who is dispatched and why. The gym ends up looking like a bomb went off. The killing is random and non-directed. The good guys, the bad guys, the innocent bystanders. When one could at least get a sense of some revenge when the two nasties get theirs, it is diminished by the briefness and coldness of the act. I first saw this film 33 years ago and I have to say that it has one of the best scare scenes of all time. I was totally taken in by it. It's not a bad movie; however, with a little bit of characterization it could have been really good. I have a feeling they just wanted to get it down and go for the cheap thrills.