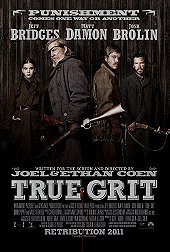 Coen brothers is doing a remake of old John Wayne movie. The overall style is perfect. However Jeff Bridges is too likable in the role. He doesn't do the hard anger. His performance has a bit too much lightness to it. At times he seems to be playing the Dude from 'The Big Lebowski'.

Hailee Steinfeld can talk really fast. But her delivery is too mannered like she's reading from a script. She talks like a machine gun; rapid, repetitive, mechanical. Granted it's a tough role, and she's doing her best.

Matt Damon is good as big talking pretty boy Texas Ranger. If anything, he could play up his pretty boy styles even more.

The movie could use more action. The story do wander a bit. It could be much tighter. This being a Coen brothers movie. Tightly wound isn't always the objective.