Review of The Departed 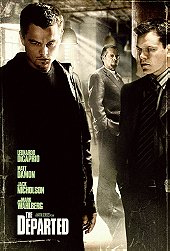 Frank Costello (Jack Nicholson) is a Boston Irish mobster. He mentors Colin Sullivan (Matt Damon) ever since as a little kid. Eventually Colin joins the Special Investigation Unit in the State Police headed by Captain Queenan (Martin Sheen) and the unpleasant Staff Sergeant Dignam (Mark Wahlberg). He works directly under Captain Ellerby (Alec Baldwin). He begins a relationship with police psychiatrist Madolyn Madden (Vera Farmiga). Billy Costigan (Leonardo DiCaprio) is a new police recruit from a family of lowlife criminals. Queenan and Dignam put him undercover. After serving some time in prison, he works with his petty criminal cousin Sean (Kevin Corrigan) and catches the eye of Sullivan's henchman Mr. French (Ray Winstone).

Director Martin Scorsese goes to Boston to film this gangster opera. The cast is second to none. There is great acting being done here. Leo is terrific holding up even against the peacock acting of Nicholson. Winstone is powerfully rough. Damon is twisting his sweet persona into something a bit more of a douche. There is a bit too much plot and sometimes, the movie tries to do too many things. For example, Scorsese doesn't need some of the camera moves or the back and forth editing which only distracts from staying with the plot. It may work even better with a simplified style. This movie is best at its bloody brutal core especially with Leo acting up a storm.