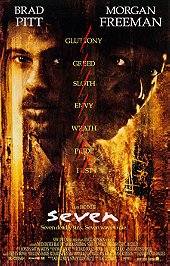 Warning: Spoilers
Se7en starts as rookie homicide detective David Mills (Brad Pitt) is paired up with veteran detective William Somerset (Morgan Freeman) who is set to retire in seven days time. The first case they are called to is that of an obese man who has been forced to eat himself to death, then a lawyer is found dead with the word Greed written in his own blood by his body & upon checking the obese man's apartment the word 'Gluttony' is found written in fat & grease. The connection is made & Somerset believes that a serial killer is at large who has some higher motive & is using the seven deadly sins as a moral reasoning behind his brutal crimes. Somerset is sure that he will strike again & he does, as more mutilated & tortured bodies turn up it emerges that the killer is playing a macabre game that will see him & his crimes remembered forever...

Directed by David Fincher this is quite simply a marvellously gripping serial killer thriller that is as good as The Silence of the Lambs (1991) & is considered a classic, as I write this comment Se7en is placed at number 26 in the IMDb's all time top 250 films as voted for by the ordinary person who uses the site (not stuck up critics) & who am I to disagree? The whole production blends together seamlessly to create a truly gripping & absorbing thriller, from the gloomy production design to the terrific acting to the wonderful script & it's character's. It's easy to be drawn into the world of the two leads as they search for a serial killer, Freeman's fantastic performance as Somerset in particular is great to watch, he is thoughtful, precise, likable & smart in an ordinary bloke sort of way while Pitt as Mills is his opposite who is naive & immature. Together they make a perfect contrast of character's & they feel like real people. The script has some great twists & turns but the big one at the end is a real show stopper, it's a great twist ending that just works on so many levels & is brilliantly executed. Se7en has it's seedy, sleazy & gloomy moments but it tries to paint a world where sin is accepted all to freely, there are some great speeches here especially by Somerset that indicate all is not lost but it's easy to see that the real world is full of the sin that is punished here & that we also just accept to readily so it even has a strong relevant social message that does have meaning but at the same time but the script still manages to make a terrific dark thriller out of the ideas here. Lasting for two hours & not being the most action packed film ever patience is definitely needed but I do think the twists & plot do hold ones attention very well, for me the two hours flew by & it didn't feel that long which is always a great sign & one that the film didn't bore me & maintained my interest throughout right until it's killer twist ending.

The film looks great with dark & gloomy production design that suits the downbeat seedy world created in the script. There are some gruesome murder scenes & shots of dead bodies although little in the way of actual on screen violence (the killer is never seen killing or hurting anyone on screen for instance), the special effects as expected are top notch (just look at the obese man's corpse on the autopsy table). People make mention of the fact it's always raining in the city scenes but apparently this had nothing to do with thematics or style or the makers vision but because during the first two days of Brad Pitt filming it was raining so to avoid any continuity issues the makers decides to make it rain during all Pitt's outdoor scenes. Apparently the brilliant Canadian director David Cronenberg was offered the chance to direct but he turned it down, imagine how good this might have been if he had accepted? Denzel Washington was offered the part of David Mills that went to Brad Pitt while R.E.M.'s Michael Stipe was considered for the role of the killer.

With a supposed budget of about $30,000,000 this was New Line Cinemas first big budget 'A' film & it made a load at the box-office, filmed in Los Angeles in California the name of the city where Se7en takes place is never actually mentioned on screen. The acting is superb all round, Freeman is excellent as is Kevin Spacey & R. Lee Ermey while it was nice to see Shaft himself Richard Roundtree.

Se7en is a terrific serial killer thriller that has a great script, a great twist, super acting, good effects, striking production design & a fair bit of depth. There aren't many films I would call classics but maybe Se7en would be one of them.