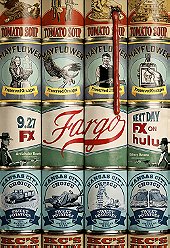 Warning: Spoilers
The 1996 Coen Brothers film was a great Oscar winning black comedy thriller, and when I saw the trailer for the television spin off I knew it was going to be a big hit, I was definitely up for seeing more wood chipper inspired deaths or other violent activities in the snowy surroundings. Basically set in 2006, drifter and hired killer Lorne Malvo (Billy Bob Thornton) is passing through the snowy town of Bemidji, Minnesota, he comes from Fargo, North Dakota, he is conning God believing and wealthy businessman Stavros Milos (Oliver Platt) into paying a high amount of money to stop him ruining his fortunes and killing anyone close to him. While passing through he gets into a discussion with insurance salesman Lester Nygaard (Martin Freeman), following this exchange Malvo murders the man who has been bullying him, and he helps him cover up the murder of Lester's wife, and the chief of police who Malvo killed. Deputy police officer Molly Solverson (Allison Tolman) against the authority of Police Chief Bill Oswalt (Bob Odenkirk) is investigating the series of murder that are occurring, thinking that Lester is somehow connected to the killer, and Duluth police officer, later turned postman, Gus Grimly (Colin Hanks, Tom's son) becomes involved after being threatened in an encounter with Malvo. Throughout the series Malvo continues his killing spree, both while hired and anyone who gets in his way, Lester becomes increasingly desperate and demented as he tries to hide his connections to the crimes, Molly and Gus get closer as they work together, marrying and Molly being heavily pregnant, and they are often sidetracked from trying to find and catch the killer, and we also see FBI agents and hit men getting involved with these occurrences. Also starring Nashville's Keith Carradine as Lou Solverson, White House Down's Joey King as Greta Grimly, Russell Harvard as Mr. Wrench, Joshua Close as Chaz Nygaard, Adam Goldberg as Mr. Numbers, Susan Park as Linda Park, The Perks of Being a Wallflower's Kate Walsh as Gina Hess, Keegan-Michael Key as FBI Agent Pepper, Jordan Peele as FBI Agent Budge, Gordon S. Miller as Dmitri Milos, Spencer Drever as Gordo Nygaard and Kevin O'Grady as Sam Hess. Thornton is astonishing as the malicious and seemingly untouchable killer, Freeman putting on a perfect American perfect is great as the ordinary man stuck in the middle and weaselling his way out of it, Tolman is fantastic as the female police officer who is ignored while being right and determined to solve the case, and Hanks is terrific as the police officer also tested as he tries to help the dangerous man he encountered. The series was really gripping with the frequent and always over the top sequences, including a blood shower, a store swarmed with locusts, an unseen gun slaughter going through a building, a shooting in a lift, and many more bloody and over the top moments, it was this mixed with the investigation and hiding secrets plot lines that kept me watching and loving it to the end, I am not surprised they are considering a second season, it is a brilliant dark comedy-crime drama television show. Very good!