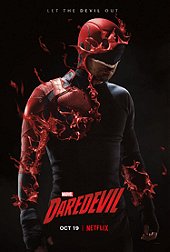 Now, I can't really claim to be much of a fan of superheroes in general, but I was recommended that I watched "Daredevil", but was a little bit reluctant given the movie that had Ben Affleck in it.

But I decided to give it a go anyway, and must admit that I was so happy and thrilled that I did so, because "Daredevil" really turned out to be an amazing thrill ride of entertainment, action and character development.

You quickly take a liking to the various characters in the show, both good and bad, because they are so detailed and nuanced that it feels so very realistic and natural. And it was helped along so nicely by a rather impressive cast whom put on amazing performances. I was especially impressed with Charlie Cox (platying daredevil), Vincent D'Onofrio (playing Wilson Fisk), Elden Henson (plating Foggy Nelson) and also Deborah Ann Woll (playing Karen Page).

One thing that didn't sit well with me, was the fact that you had to wait the entire first season before you got to see the suit. A clever way of keeping the viewers glued to the screen or just downright idiocy? I do not know, but I believe it was the former.

Granted I have only seen seasons 1 and 2, but I have been so very adequately entertained by it, that I most definitely want to watch season 3 as well.