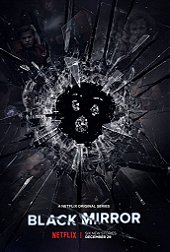 Warning: Spoilers
I saw the adverts for this series, and it was after seeing that it was repeated that I noticed Charlie Brooker was the creator, and being a huge fan of his last drama Dead Set I was certainly going to watch the three episodes. Episode 1: The National Anthem, sees Princess Susannah (Lydia Wilson) kidnapped, and as ransom for her safe return the demands are that Prime Minister Michael Callow (Quantum of Solace's Rory Kinnear) must have sexual intercourse with a live pig and it must be broadcast on all news channels. After many attempts to solve the problem with alternatives, such as locating the kidnapper hideout, this disgusting act is forced to happen, but the Princess was released before the deadline, and even though Michael's career continues his social and home life is less good. Episode 2: Fifteen Million Merits, sees a bleak automated Britain where people are forced to live inside a place where to earn credits for food, and enjoy visual entertainment, e.g. pornography from Wraith Girls, they must constantly ride on exercise bikes, and they lose merits for buying food and skipping entertainment. Bingham 'Bing' Madsen (Psychoville's Daniel Kaluuya) decides to help out new friend Abi (Jessica Brown Findlay) get her chance to become a singing star on X Factor style talent show Hot Shot, with judges Judge Hope (Rupert Everett) and Judge Charity (Julia Davis) and Judge Wraith (Ashley 'Bashy' Thomas). This costs him 15,000,000 merits of his, but he is not bothered as he does not do luxuries, but in the end she ends up on Wraith Girls, and he only "gets out" by speaking his mind about the system, but he remains in near solitary. Episode 3: The Entire History of You, technology has allowed people to store all their memories, such as conversations and experiences, in their heads with the help of super chip placed near behind their ears, and they can look back and experience any of these again. Young lawyer Liam Foxwell (Toby Kebbell) starts suspecting his wife Ffion (Jodie Whittaker) is having an affair with a man called Jonas (Tom Cullen), and he is looking back on any memories he has that would suggest this, and obviously he forces her to show her memories and confirm the suspicions. The series is a great satirical play on the significance technology has played in the world, the first episode focusing on the Twitter age and news coverage, the second on the impact of applications and talent shows, and the third about image capturing, and obviously the title Black Mirror refers to ourselves being part of all this, it is a must see drama mini series. Very good!