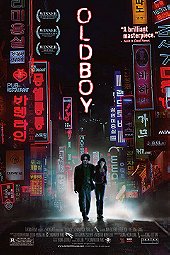 It was 1988 Seoul and Oh Dae-Su got drunk on his daughter's birthday. After his friend Joo-Hwan got him out of the police station, he is kidnapped off the streets. He is imprisoned in a motel-like cell. He gets gassed periodically without explanation. After 15 years, he is released from a giant suitcase on top of a building. There's a strange guy with a poodle who falls to his death. A bum gives him money and a cellphone. A mysterious man calls to taunt him. He passes out in a sushi restaurant and the cute chef Mi-do takes him home. They both have had hallucinations of ants. His daughter is adopted and living in Stockholm after his wife was murder and he's assumed to be the culprit. He discovers the prison where he was imprisoned. The wealthy Lee Woo-jin reveals himself as his tormentor with a deadly threat against every women that he loves.

As I watched this, I kept thinking of David Lynch and to lesser extend Quentin Tarantino. It's got the bloody violent revenge plot at the center of this. What I love more is the weird surreal touches. There's no way that a guy is going to eat a live octopus in any Hollywood movie. It is such a strange plot move to find a place by how a dumpling taste. It takes the cool violent movie to a weird off-kilter place.