Review of The Pianist 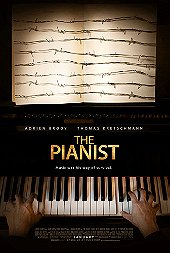 Warning: Spoilers
Film makers have to step carefully when dealing with issues like the Nazi extermination program. There have been equally brutal programs of ethnic cleansing in places like Southeast Asia and Rwanda, in which hundreds of millions died, but nothing like this in Europe since the Middle Ages. The victims here were not only Jews but Gypsies, the mentally ill, homosexuals, socialists, communists, and political undesirables. The Nazis eliminated not six million but some uncountable number between 12 and 15 million. An event like that can't be treated lightly and milked for easy tears, or the event itself is cheapened.

Fortunately, the films that have explored the subject have been uniformly well done, as Roman Polanski's "The Pianist" is well done. Polanski himself suffered in much the same way as the protagonist, Vlad Szpilman (Adrien Brody). Polanski has a habit of embellishing his tales but there's no question that in this instance he knows what he's talking about.

Szpilman is a well-known young pianist on Warsaw radio but the German occupation puts the station out of business. He and his family are herded into the Warsaw ghetto where they are subject to constant abuse and occasional murder. Szpilman barely escapes being sent to Treblinka with the rest of his family. And for the last half of the film, with the help of some friends who endanger themselves by lending him aid, he scuttles rat-like from one hiding place to another, each more dismal and perilous than the last. He suffers jaundice, his hair and beard grow long, his clothes turn to tatters, his food disappears, he's half frozen, and he seems to shrink.

He's reduced to living in the attic of a nearly demolished apartment building and is ecstatic to discover a gallon can of pickles overlooked on the top shelf of a kitchen cabinet. The can falls out of his hands while he tries to open it and rolls across the floor to come to rest at the boots of a German officer, Captain Hosenfeld (Thomas Kretschmann). The only Germans we've seen so far have been brutes -- ridiculing the insane, executing Jews who ask simple questions, or simply shooting people chosen at random.

We expect nothing from Hosenfeld except a quick shooting. But Hosenfeld is a human being and, having discovered that Szpilman "is" -- or rather "was" -- a pianist, he asks him to play a piano left in one of the flats. Szpliman has been unable to play for years and when he seats himself we worry that he might not bring it off and, indeed, his first chords are tentative, uncertain. Then his playing becomes automated, the old habits return, and he dashes off a dramatic and exquisitely executed piece of Chopin. Hosenfeld has been leaning back, enjoying the music, then leaves Szpilman quietly to his attic. He returns a few times later, before the Germans withdraw before the Russians, and unceremoniously hands him a few packages of food and, finally, his overcoat. The matter-of-fact compassion shown by Hosenfeld, and Szpilman's desperate need for contact with another human, are very moving.

When the Russian troops finally arrive, Szpilman stumbles out of his hovel to greet them, but seeing his overcoat the Russians open fire on him. Szpilman finally convinces them that he is a Pole, not a German, and one of the befuddled soldiers asks, "Then why the ****ing coat?" Szpilman is trembling with fear but manages to gulp, "I was cold." An epilogue tells us that Szpilman went on with his career and Hosenfeld wound up in a Soviet prison camp where he died in 1952, despite Szpilman's attempt to find him. Under the end credits, a smiling Szpilman plays a lively, sparkling composition by Chopin.

It's a remarkable film. Polanski is no longer the Wunderkind but a mature film maker. Nothing is excessive. We need only as much as we need to know to understand Szpilman's travails -- one tragedy following another. There are no sentimental speeches at the final parting of Szpilman and his family. Szpilman himself never breaks down. He simply does what needs to be done to survive. And Adrien Brody captures what Szpilman must have been like. (From some angles he resembles the young Arthur Rubenstein.) Kretschmann gets Hosenfeld down pat as well. In their scenes together we sense their respective positions -- one man with nothing left to lose, the other with nothing left to gain. The story, and the historical facts it's based on, raise many questions about human nature, of course. I'm not at all sure that if we could find the answers to those questions we would like what we found.

One of the better films of the year.