The Lord of the Rings: The Return of the King review
9 Views
0

Review of The Lord of the Rings: The Return of the King 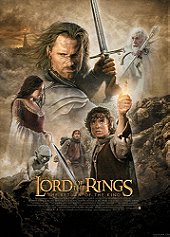 Frodo Baggins and Samwise Gamgee are guided by Gollum to the darkest of Mordor. Gandalf leads the group to to Isengard where they are surprised to find Merry and Pippin having already defeated Saruman. Pippin touches the crystal ball and Sauron mistakenly assumes that he is the ring bearer. Gandalf and Pippin travel to Gondor's capital Minas Tirith but they find mad Denethor on the throne.

The quest comes to an end. There is a ton of CGI and it's state of the art. It is fully deserving of the moniker epic. It comes to a climatic apocalyptic battle at Minas Tirith. Then the movie has to keep going for another hour. That can't be helped but the battle in front of the Black Gate is no more than anti-climatic. Also Aragorn releasing the Dead Men struck me as short-sighted heroism. Sometimes, watching something can shine a different light on the idea. It would be better for the Dead Men to not give Aragorn a choice. This movie broke the Oscars by winning eleven. Technically it is far superior and the story is a compelling epic.