Review of Ju-on: The Grudge 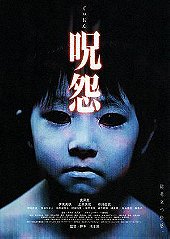 Next to the "Ring", "Ju-On" is easily the most infamous horror franchise to stem from the early 2000's J-horror boom. The series has incredible longevity, inspiring not only a slew of Japanese sequels and reboots, but a full franchise in America as well. As could be expected, the films have grown rather rote and predictable by now, but the original Japanese film remains to be considered a classic. And while it is a decent enough offering of supernatural horror, it's far from perfect. It's non-linear narrative is at once the aspect that makes it original, and one of it's downfalls. Because we're simply moving from victim to victim, the film takes on the feeling of a slasher film. At some point we're just watching different, completely un-developed characters be stalked and bloodlessly killed by the evil spirits.
The film's best moments come from a strong sense of atmosphere and dread. It's terrifying to think of the haunting as a curse, that is not confined to one place, and cannot be escaped. The scares are entirely visual, but in this sense, they're hit or miss. Images such Kayako's pale, wide-eyed corpse sliding down the stairs with the movements of an insect, or the spirits of victims waiting outside their friend's window to claim them, are quite horrific. But then, other moments, such as a horde of cuddly black kittens appearing in a woman's bed, or a very poor CGI rendition of Kayako are completely ineffective. Truth be told, the film just doesn't scare me most of the time, and it's images aren't always as unnerving as it seems to think they are. It also doesn't help that the story of the central haunting is so cliched, in comparison to the more outlandish plotlines of other Asian ghost stories. In the end, it's a film that certainly has it's moments of creepiness, but it's a very mixed bag.