Review of The Lighthouse 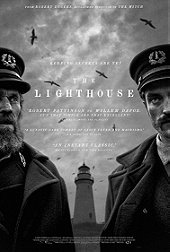 I could not have predicted that "The Lightouse" would become my favorite horror film of 2019, much less one of the greatest horror films of the entire decade. One may expect a horror flick about a secluded lighthouse to simply be a ghost story, or a Lovecraftian tale of deep sea terrors. And while this film pays tribute to those notions and legends, it's purely a psychological horror. Robert Egger's direction is fantastic, with a cramped aspect ratio lending a feeling of increasing claustrophobia, and the black and white cinematography making the already dimly lit film, even darker and more ethereal. There is a thick, inescapable and uncomfortable feeling of dread and anxiety smothering the entire film, yet, it's darkness is engaging and hypnotizing. But the utmost praise must be given to Robert Pattison and Willem Dafoe. This is their two-man show, and they both give some of the most shattering, vulnerable, fiery and terrifying performances I have ever witnessed on film.
This is, at the end of the day, a film about the mental deterioration of two men with horrible secrets. Two men who were broken long before they wound up trapped on a tiny island. It's also about masculinity, with Pattison's character always eager to please his gruff boss, and Dafoe obviously wanting for a son, but afraid to let anyone close. I'm not sure why so many are so confused by the film's events. There are plenty of hallucinations, dreams and metaphors, but with at least two viewings, the reality is quite clear to me. It's about guilt, shame, insanity and isolation. Whether it be isolation on an island, or isolation from one man to the other. And the fantastic, brutal performances are what carry the film.
The atmosphere envelops you in a haunting, uncomfortable realm, and the acting forces you to probe the depths of mental illness and loneliness. There is so much craftsmanship and so many small inflections to notice, that each viewing leaves you with more to think on. It's not an easy film to watch, and it won't leave you in a positive mood. But it's truly a disturbing, unnerving film, that terrifies you in a deeper manner than most horror films attempt to. I could rattle on, and on about it, but suffice to say, it's a masterwork.