Review of 30 Days of Night 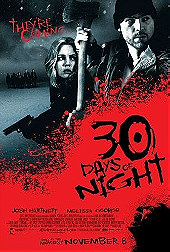 Here is a film that has an utterly fantastic premise, yet entirely the wrong execution. The concept of vampires invading an Alaskan town where the sun does not rise for an entire month, is pure genius. Even better is that these vampires are feral, nightmarish creatures and not romantic, mopey pretty boys. There was a chance for this film to be a classic, and while it's decent, it certainly didn't reach the heights it strove for. The most apparent problem is it's completely bone-dry script. There's a lot of fascinating ideas here, but nothing is fleshed out. The characters are barely even clichés. They're simply devoid of any personality or defining characteristics, and the dialogue is rudimentary. There's no one to care about, only in the most general sense. The cast themselves are a mixed bag. I've always been a fan of the vastly underappreciated Josh Hartnett, and he's good here, but only as good as the script allows. Melissa George also gives a good performance, per usual. The supporting members are all interchangeable and some of them can't deliver a line to save their lives.
It's the vicious, black-eyed vampires that steal the show, and provide the film with it's most interesting moments. Danny Huston is especially impressive as the dapper-dressed leader of the pack, spitting out an ancient language at his victims, before ripping them limb to limb. The creatures are merciless, foul and fittingly cold-blooded. There's truly some intense and harrowing scenes of violence and gore, and that's when the film is at it's best. David Slade directs erratically, clearly taking inspiration from the cinematography and fast-moving editing of "The Descent" and "Crank", but he's simply unable to keep pace. The film moves from slow-burning tension to hyper action so quickly that it doesn't gel. And without any characters or plot to latch onto, the film simply becomes a sporadically entertaining genre piece. It simply doesn't have the personality or writing to do it's good ideas justice. But when it gets going, it can be exhilarating and intense. Just a shame that it's not what the source material deserves.