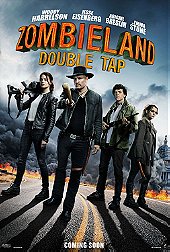 It was already a risk making a sequel to "Zombieland" after 10 years. But I never could've predicted it would turn out this badly. Especially with the same great cast, writers and director that gave us the classic original film. But this film makes the cardinal mistake that any truly atrocious sequel does. It's nothing but a re-hashing of exactly the same story we were given 10 years ago. Even in the world of the film, 10 years have passed, but it's hard to believe that, as the characters have apparently gone through absolutely no growth whatsoever. The original film was about a group of loner misfits with severe trust issues coming together and finding family in a zombie apocalypse. And "Double Tap" is about the same people, 10 whole years later, doing the exact same thing. You'd think the characters would have sorted out their differences, or gone their separate ways years ago if this was still the case, but no, Wichita still can't commit to Columbus and Tallahasse still can't decide whether he wants to be brooding loner or brooding grandpa. So the entire film is framed around the characters re-learning the exact same lessons they learned 10 years ago. This is not just lazy writing, this is an active refusal to think of an original plot.
A blatant cash grab, if you will, because the only thing that makes this more than a remake of the original are a slew of new jokes and comedic scenes. Sadly, the humor is massively downgraded as well, and the writers seem to have taken the "irritating = funny" approach this time around. Most of the humor comes from several new characters that are introduced along the way, all of whom are apparently supposed to be comical because of how unbearable and annoying they are. There's only a few moments that are effectively funny throughout the overlong runtime, most of them between Eisenberg and Harrelson, but otherwise there's absolutely nothing to see here. The film isn't funny, it disrespects it's characters by treating them as imbeciles, and the whole shebang is so transparently uncreative that the finale even takes place in an amusement park, also exactly the same as the original. This is one case where I agree with the critics, and I'm dumbfounded at the audience adoration for this steaming garbage. I've no idea how this turned out so wrong, but I can only hope the filmmakers don't further tarnish the memory of the classic original.