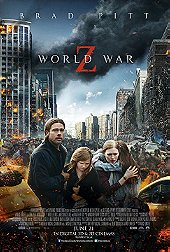 There was incredible hype surrounding this film when it released. It became the highest budget horror film to ever be made, and there was talk of "a horror film finally taking an Academy Award". But the truth is, this is simply a very generic exercise, often devoid of the things that make most zombie/infection films good in the first place. This particular film was stuck in development hell for years, cycling between a multitude of scripts, and it shows.

The film is huge in it's scope, detailing a worldwide zombie outbreak, yet it mostly ends up feeling like slides from an extended field trip. The main character darts around the globe in the timeframe of a few days, staying in each place just long enough for a set piece or scene of massive violence to break out, then the flimsy plot moves along to the next. The book the film is based upon was fascinating because it focused in detail, on how different countries and governments handled the outbreak, here all of the political subtext is thrown out in favor of quick and erratically directed action scenes.

There's plenty of good actors present, but none of them have anything to sink their teeth into. The film couldn't feel more cold, or emotionally empty, which is astonishing considering the human implications of it's story. It has only the most greeting card-like sentimentality, and the dialogue is mostly a prop. That's not to say it's a completely horrible film, as it does offer some escapist entertainment at moments. Some of the scenes, such as a nail-biting outbreak on a cramped plane, or the rather suspenseful third act inside a research facility overrun with the infected are quite effective. But that's the only thing the film ever offers, dumb popcorn fun, albeit with an overly-serious tone and direction and cinematography that are the definition of corporate filmmaking. It's worth a look for zombie fans, and as said, it has it's moments. But it's a surprisingly empty film for one with such big questions on it's mind.