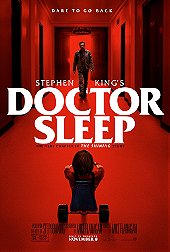 I'm not at all a fan of "The Shining", so one may ask why I'm bothering to watch what basically amounts to it's sequel. The answer is Mike Flanagan. I've been following Flanagan's career since his debut film, "Absentia", and he has remained my favorite horror director of this decade, and one whose imagination and skill is seemingly endless. I'll watch anything this man puts out, and this film was to be no exception. And just like any of his other films, this one was well worth the watch. It works as both a homage to the Kubrick film, and to the King novel. Thusly, it will satisfy both those who preferred either the film or book version. A knowledge of the prior film is not needed, although it greatly helps to magnify one's appreciation of the story and the scenes that Flanagan so lovingly recreates.
Meanwhile, the story of a full grown Danny Torrance coming to terms with his psychic abilities and fighting a band of soul sucking vampires also works wonderfully. Ewan McGregor is as good as expected in the lead role, but Rebecca Ferguson and young Kyleigh Curran steal the screen. Ferguson is fiendish and stylish as the main villain and is a pure joy to watch and Curran shows great depth and range for such a young actress.

The film doesn't always work as a straight forward horror picture, containing elements of fantasy as much as anything else, but when the film does kick into the horror bits, it doesn't hold back. And the end is an especially stunning tribute to the source material, focusing at once on the visuals of Kubrick's film and the complex emotional core of King's novel. It felt epic to me, even as someone who isn't a fan of the 1980 film. It's a strange picture, and one that almost feels like it shouldn't work as well as it does, but I'll be damned if it isn't incredibly creative, full of heart and exceptionally directed. Easily one of the best horror films of 2019, and further proof that Flanagan is a master.