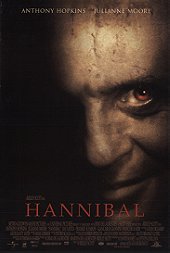 Despite the illustrious pedigree of the talent involved in the making of this sequel, it simply cannot compare to "The Silence Of The Lambs", or even the prequel that comes after it. Not even the efforts of such superb actors as Hopkins and Moore, or the direction of Ridley Scott can keep this preposterous film afloat. And the main reason for this, is quite simply, the very novel it is based upon. In both book and film, gone is everything that made the characters of Hannibal and Starling so fascinating, replaced only with gore and a constant need to up the shock value factor.Now, I'm perfectly fine with shlocky, campy horror films, but to degrade such complex, mysterious characters to cartoon characters is simply disrespectful. And truth be told, this film doesn't even function that well as a straight horror pic. It's far too busy keeping up the appearance of sophistication, thus never allowing it's colorful characters to become as unhinged as they should be.Furthermore, the concept of Lector's interest in Starling being degraded to nothing but cliched sexual attraction is crushingly disappointing. It's staying true to the novel, of course, but this is a film adaptation of a novel that never should have happened. Neither can decide whether they want to uphold the thoughtful tone of the previous works, or descend into grindhouse horrors. And the two approaches only cancel each other out together. This is truly an embarrassing, pointless, cheesy endeavor for all involved. It destroys everything that made it's predecessor so masterful, and reduces Hopkins to playing a more well-mannered Freddy Kruger. Not the sequel that fans deserved, or wanted.My Rating:  4/10