The Silence of the Lambs review
3 Views
0

Review of The Silence of the Lambs 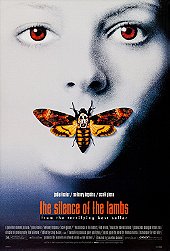 This may all together, be the most successful horror film of all time. It's easily the most esteemed, as one of the few more gruesome pictures whose artistry shone through enough that not even awards ceremony snobs could look down their noses at it. It also irrevocably changed the landscape of popular film, making serial killer thrillers and police procedurals the bankable industries that they remain today. Some would argue whether or not it qualifies as a true horror film, but I see no argument for it's not being one. This is a film very different from most thrillers. It focuses itself almost solely on the psychological torment of it's characters, and thusly, it's most often trying to scare and unnerve it's audience, in a manner that only horror films ever do.But it's a refined, artistic film. One more concerned with character and subtle commentary than guts and gore. What truly elevates it, is the amazing cast. Nothing really need be said for the performance of Sir Anthony Hopkins as Hannibal Lector. He crawls under the skin, and stays there. Truly the boogeyman, if he was ever captured on screen. Foster's performance is just as fantastic, and layered with emotions. Even Ted Levine brings thoughtfulness and subtlety to Buffalo Bill, despite not being given as much to work with.The film is also layered with subtle feminism, the kind that is ever-present, without ever needing to make statements out loud. Agent Starling is constantly fighting to be respected by her peers, in a clearly male dominated field. Men are attempting to manipulate her from all sides, whether it be Lector's riddles, leading her on, or creepy colleagues treating her as less. And the film's more graphic moments are handled with a sense of quiet urgency and humanism. For the mark it's had on film tropes, and the pure craftsmanship in it's making, this is forever a classic, and proof that horror can be so dignified and artful, that years later, the snobs are still trying to argue whether or not it is horror at all. It is, and it's a masterpiece at that.My Rating:  9/10