Review of The Mummy 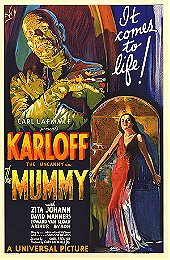 Out of all the original Universal monster films, this one is easily the least fondly remembered. Even upon it's release it was much less well received than it's contemporaries, and only fares slightly better today. Truth is, it doesn't hold up as well as films like "Dracula" and "The Wolf Man" because it simply isn't as good. It starts off strong with a scene set in the night hours of Egypt, where a recently unearthed mummy slowly comes to life and terrifies a young assistant. Sadly, nothing of this incredibly atmospheric caliber is seen again for the entire runtime.

Instead, the film casts Boris Karloff as more of an ancient magician than the shambling, monstrous mummies we think of today. While Karloff's performance is excellent, the film really just plods along. It's plot is incredibly barebones, even for it's time, and there aren't many creepy or significant scenes. The terribly anti-climatic ending just seals the deal, making this a decidedly mediocre endeavor. Edward Van Sloan is wasted in a role that mostly feels like him just playing Van Helsing with less screen-time, and Zita Johann's stilted performance doesn't make her a very charming leading lady. This just isn't the classic tale of mummy mayhem you'll be hoping for, and it's easily one of Universal's weakest.