Tales from the Hood review
1 Views
0

Review of Tales from the Hood 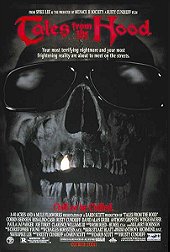 Judging by it's tongue in cheek name, one may expect this to be a goofy horror-comedy. And while the film is certainly sprinkled with very dark humor, this couldn't be further from the truth. Instead, at most times, this is a very serious film. It takes the concept of old Amicus anthologies such as "Tales From The Crypt", containing horror stories that function as morality plays, and gives it an African American twist. The segments in this film deal with issues such as police brutality, domestic abuse, institutional racism and gang violence. It's strange to observe that this film came out in 1995, but it's themes are more timely than ever in 2020.

It has maintained it's cult following for good reason, as the direction obviously takes inspiration from said Amicus films. The film is slick, and well acted for the most part. But it's the themes and thoughtful writing that make it clever, moving and poignant. Furthermore, it avoids the trap that most anthology films fall into, as there isn't a single bad segment here, and even the wrap-around ends in a witty, albeit disquieting manner. It's a film that manages to be important, fun and creepy all at the same time. One that not only all horror fans should give a fair chance, but that anyone interested in films that address social politics should see as well.