One of John Carpenter

"I know I'm human. And if you were all these things, then you'd just attack me right now, so some of you are still human. This thing doesn't want to show itself, it wants to hide inside an imitation. It'll fight if it has to, but it's vulnerable out in the open. If it takes us over, then it has no more enemies, nobody left to kill it. And then it's won."

Tagged as a loose remake of Howard Hawks' 1951 flick The Thing from Another World (itself an adaptation of a John W. Campbell novella), John Carpenter's The Thing is a seminal horror picture that hooks you in from the outset and never lets go. Although the production is now considered a cult classic and one of Carpenter's finest efforts, The Thing was not exactly well-received upon release back in 1982 - critics lambasted it, while other summer films like E.T., Poltergeist and Conan the Barbarian were also vying for box office dollars, thus restricting The Thing's gross revenue. Luckily, it was given new life on home video, resulting in the kind of attention it deserved in the first place. Carpenter has crafted one hell of a white-knuckle thriller here; an engrossing examination of paranoia and the repugnant nature of mankind's dark survival instinct. On top of being an impressively gory creature feature, The Thing dabbles in psychological terror, and is heavily imbued with the brand of tension that Carpenter is renowned for. 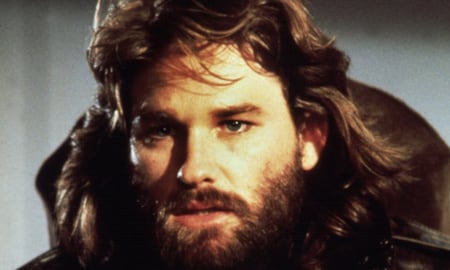 Set at an American scientific outpost in the middle of the icy Antarctic desert, the film opens as a mysterious helicopter approaches carrying a Norwegian gunman who's apparently trying to shoot a runaway husky. Believing the Norwegian to be a threat, the Americans promptly kill the gunman before learning of his motivations. Fearing that more violence is imminent, the crew travel to the Norwegian camp but find it destroyed and isolated. Also lying nearby is a mangled humanoid. Not long afterwards, the husky reveals that it's not a dog at all, but an alien organism capable of perfectly mimicking any other life-form. With the alien creature on the loose, the possibility becomes very real that one of the American crew may have been taken over, but it's unclear just who it is...

Rather than simply remaking The Thing from Another World, John Carpenter and screenwriter Bill Lancaster produced a fresh adaptation of the original novella, using the era's updated special effects to create something closer to John W. Campbell's original vision. Narratively, The Thing can probably be described as a science fiction spin on Agatha Christie's And Then There Were None (a.k.a. Ten Little Indians), as characters are being mysteriously killed but the alien murderer is able to change its identity at the drop of a hat. It's touches like this which makes the film so riveting. One could call the film derivative due to its similarities to films like Alien and Invasion of the Body Snatchers (not to mention The Thing from Another World and the aforementioned Agatha Christie story), but all horror movies are unoriginal to some extent. What matters is the technique, and The Thing is a home run in this respect. The thought that any one of the central characters can be the alien at any time becomes a source of nail-biting tension, and several set-pieces (see the blood test) are enthralling in their unpredictability. 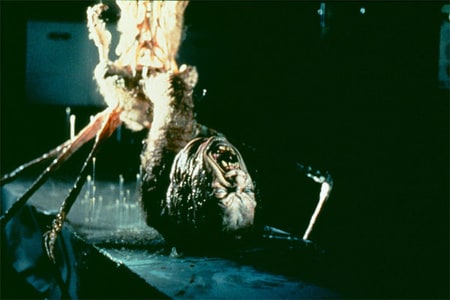 Even though this was director John Carpenter's first feature made inside the Hollywood system, The Thing was not weakened by studio interference. There's no sappy Hollywood romance or forced happy endings here - Carpenter was allowed to stick to his hallmarks (masterful widescreen photography, extreme violence, anti-heroes), but the studio backing gave him the added benefit of a generous budget. And my word, every penny of the $15 million budget was well-spent. The creature effects are still for the most part convincing and the gore is still repellent decades on, which is a testament to both the skill of FX technician Rob Bottin and the fact that prosthetics are superior to CGI. On top of this, the atmosphere is convincing, with a combination of sets and location filming allowing us to believe that these Americans are truly trapped in the middle of nowhere. Also effective is Ennio Morricone's minimalist score, which competently builds suspense. The music was clearly inspired by Carpenter's composing style, and those unaware of Morricone's involvement may be fooled into thinking that the director was responsible for the score (as he frequently is on his movies).

Kurt Russell (who had worked with John Carpenter a year prior on Escape From New York) is top-notch as helicopter pilot R.J. MacReady; one of the most involved crewmembers in finding out who the creature is. A badass, competent character actor, Russell owns the role, and his low-key performance is utterly convincing. The Thing is very much an ensemble picture though, with strong work all-round from the likes of Keith David, Wilford Brimley, T.K. Carter, David Clennon, Richard Dysart, Charles Hallahan, Joel Polis and Donald Moffat, just to name a few. There are no weak links in this cast. Only one female is in the movie, and it's strictly a vocal role: that of a computer. It's amazing to watch a horror movie which isn't marred by some bimbo of a love interest whose sole purpose is to look beautiful and attract more viewers. 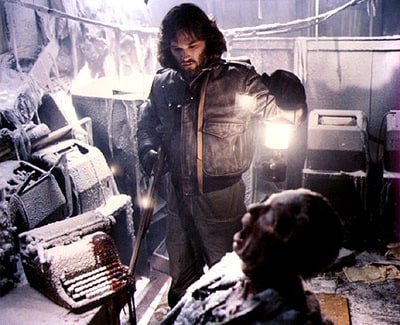 Watching The Thing in the 21st Century, it's amazing how well the film has aged. It was produced long before polished, contemporary cinema ruled by digital effects, but it remains ageless, which just proves how accomplished Carpenter and his team truly are. Its agelessness is derived from the state-of-the-art (practical) special effects, and the fact that Carpenter relies more on tension and psychological terror than outright gore. This is a B-movie through and through, but B-movies do not come much better or more proficient than this.