Life is a game! 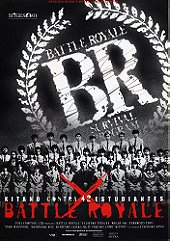 ''Life is a game. So fight for survival and see if you're worth it.''

In future Japan, the government captures a class of ninth-grade students and forces them to kill each other under the revolutionary "Battle Royale" act.

Batoru rowaiaru(2004) translating as Battle Royale is based on the shockwave novel by Koushun Takami, unsurprisingly a bestseller in Japan, and also resulting in a very controversial yet deep story. The plot is relatively simple (a class of junior high school students are forced to kill each other on a remote island, the last survivor wins and can go return home), but it is simplicity that gives the piece strength. No need for a very long prologue before we enter the main act. 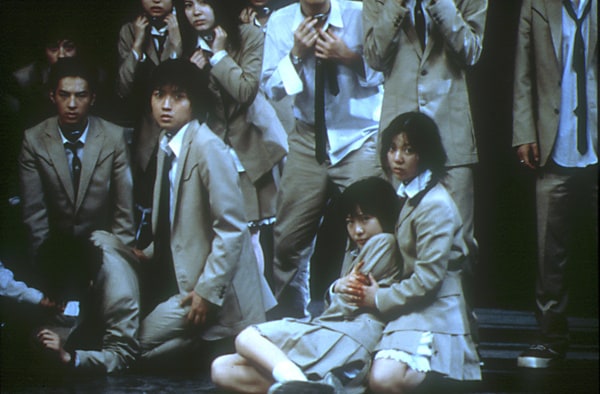 Battle Royale seems to draw it's subject matter from pieces such as The Most Dangerous Game(1932) and Lord of the Flies(1963) applying it to a socially significant tale that involves elements of horror, satire and science fiction yet hitting on deeper society subject matter at the same time. Sardonic, emotionless references to the broader picture of Japanese culture and the majority attitudes that Japanese society has for the behaviour of their youths while addressing the importance for them to succeed in their education by their peers or parents.

The same themes are made explicit, for example in a film such as Takashi Miike's Visitor Q(2001), which shares the satirical, meta-textual approach presented by Battle Royale, but in a much more subversive and controversial form. In fact, the moral implications behind Visitor Q and Miike's other great film The Happiness of the Katakuris(2001) show that the problems facing contemporary Japanese society can be corrected by restoring the basic foundation of the family unit through the retrogressive ideas of the fraternal and maternal role-models that influence in determining the future lives of their children. Tellingly, the characters of Battle Royale have evolved in ultimately being disconnected from their parents, cast adrift in a world that they're ill-equipped to understand and as a result unable to cope with the pressures of adapting to adult society.

''And so our compulsory education was coming to an end...''

Here, similarities to the story of Lord of the Flies blossom with the idea of children chaotically spiraling out of control, but contrasted further against the lurid, pulp sensationalism of a film such as The Running Man(1987) for example; In which the socio-political fears of the Japanese government are exploited by both the commercial corporations and the media into producing scandalous entertainment. It's a disturbing vision albeit a compelling one.
One that blesses the satire with a much needed dose of raw magnetism as the story takes breaks and pauses to delve into teen soap romance and the occasional paradoxes of Japanese youth cinema. Despite this though, the tone of the film is exceptional throughout; perfectly juggling the more comical moments of satire, particularly those involving the always brilliant Takeshi Kitano, with the disturbing scenario and bursts of excessive violence. It is also worth noting that the film is able to invoke elicit empathy and understanding for this large cast of characters, creating elements of back-story and personality, for many characters, from the very brief scenes of narrative exposition.

Throughout the film, the performances from the young actors are strong, covering the sheer horror presented by the film's central concept and the various ways in which the different kids attempt to survive (some refuse to fight, some band together, others attempt to smash the system and a worrying few can't wait to cause bloody mayhem), and the skilfully way in which the writers bring the usual teen preoccupations with looks, popularity and the opposite sex as factors that eventually lead to their own downfall.
Battle Royale becomes more than a film,and indeed more than merely a medium or contemporary storytelling. It is an in-depth study into the complexities of society, violence and survival. The futuristic spin and ideology of indeed fighting fire with fire brings to mind, ''Two wrongs do not indeed make a right.'' which sums up the flawed solution of solving a problem using extremist ways of eradicating violence with indeed more violence. The film succeeds in being duly a piece of entertainment and at the same time a deep engaging story that asks us questions. Battle Royale succeeds in showing us our worst natures when we are forced into a fight for survival. When the educational study comes to a close, ask yourself...What did I learn from this?

''You just have to fight for yourself. That's just life...''