A maze of temporality and investigation... 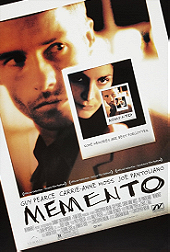 A man, suffering from short-term memory loss, uses notes and tattoos to hunt for the man he thinks killed his wife.

Memento is a 2000 American psychological thriller film written and directed by Christopher Nolan, adapted from his younger brother Jonathan's short story Memento Mori. It stars Guy Pearce as Leonard Shelby, a man with anterograde amnesia which renders his brain unable to store new memories. During the opening credits, (which portrays the end of the story) it is shown that Leonard kills Teddy (Joe Pantoliano) for the rape and murder of his wife based on information provided by Natalie (Carrie-Anne Moss). 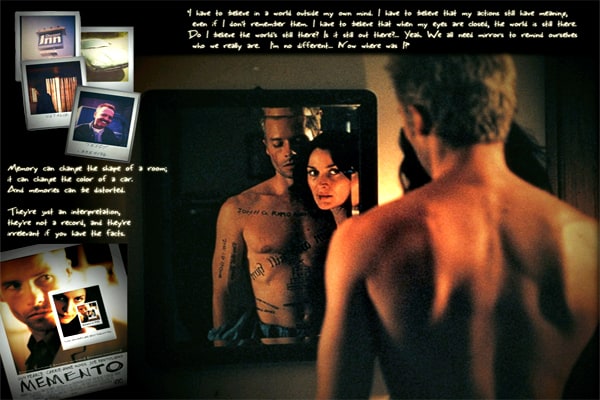 Jonathan Nolan's short story, titled Memento Mori, is radically different from Christopher's film, although it maintains the same essential elements. In Jonathan's version, Leonard is instead named Earl and is a patient at a mental institution. As in the film, his wife was killed by an anonymous man, and during the attack on his wife, Earl lost his short-term memory. Like Leonard, Earl leaves notes to himself and has tattoos with information about the killer. However, in the short story, Earl convinces himself through his own written notes to escape the mental institution and murder his wife's killer. Unlike the film, there is no ambiguity that Earl finds and kills the anonymous man.
David Julyan composed the film's synthesized score. Julyan acknowledges several synthesized soundtracks that inspired him, such as Vangelis' Blade Runner and Hans Zimmer's The Thin Red Line.
While composing the score, Julyan created different, distinct sounds to differentiate between the colour and black-and-white scenes: "brooding and classical" themes in the former, and "oppressive and rumbly noise" in the latter.
Since he describes the entire score as Leonard's theme, Julyan says, "The emotion I was aiming at with my music was yearning and loss. But a sense of loss you feel but at the same time you don't know what it is you have lost, a sense of being adrift." Initially, Nolan wanted to use Radiohead's "Paranoid Android" during the end credits, but he was unable to secure the rights.
Instead, David Bowie's "Something in the Air" is used, although another of Radiohead's songs, an extended version of "Treefingers", is included on the film's soundtrack.

The main role went to Guy Pearce, whom impressed Christopher Nolan the most. Pearce was chosen partly for his "lack of celebrity" (after Brad Pitt passed on the film, the budget could not afford A-list stars), and his enthusiasm for the role, evidenced by a personal phone call Pearce made to Nolan to discuss the part.
After being impressed by Carrie-Anne Moss' performance as Trinity in the 1999 science fiction film The Matrix, Jennifer Todd suggested her for the part of Natalie. While Mary McCormack lobbied for the role, Nolan decided to cast Moss as Natalie, saying, "She added an enormous amount to the role of Natalie that wasn't on the page". For the corrupt police officer Teddy, Moss suggested her co-star from The Matrix, Joe Pantoliano. Although there was a concern that Pantoliano might be too villainous for the part, he was still cast, and Nolan said he was pleasantly surprised by the actor's subtlety in his performance.
The rest of the film's characters were quickly cast after the three main leads were established. Stephen Tobolowsky and Harriet Sansom Harris play Sammy Jankis and his wife, respectively. Mark Boone Junior landed the role of Burt, the motel clerk, because Jennifer Todd liked his "look and attitude" for the part (as a result he has re-appeared in minor roles in other productions by Nolan). Larry Holden plays Jimmy Grantz, a drug dealer and Natalie's boyfriend, while Callum Keith Rennie performs the part of Dodd, a thug to whom Jimmy owes money. Rounding out the cast is Jorja Fox as Leonard's wife and Kimberly Campbell as a prostitute.

So what exactly is Memento? It consists of an emotional shock that results in unhinged revenge, Leonard Shelby is now piecing back the bits of remembered past... Or is he? Is he alive? If we agree that a person doesn't exist as an entity without memory, in an uncanny state of limbo, and that this frozen Leonard is watching his life flash by. It is a ponderous question invented for all us deep thinkers, allowing us to theorize our own conclusions and interpretations.
As all the pieces start to come together in this jigsaw, at the climax yet in the narrative's ascending beginning, Leonard is denied all the usual action of a hero's benefits and indeed rewards reaped: Increased self-knowledge, knowledge of the world and the plots' occurrences.
He is given the answers at the start yet only remembers the questions. Leonard at the end is indeed a more richly coherent character than he was at the beginning, when we first see him.
What really makes this a stunning movie is the way it is constructed and the narrative structure. The scenes are presented in reverse chronological order, then black and white scenes, which are told in a forward order, so that we know the latest action first, and at the end of the movie find out the earlier action. This seems an extraordinary way to tell a story, but it works. Incidentally, there's a Seinfeld episode told this way, the one where they go to India for a wedding; and to some extent this technique was employed in Quentin Tarantino's Reservoir Dogs in 1992. What makes it particularly effective here is the material. Leonard, as Teddy points out, is not the same person he was before his wife's death and his injury. The direction of time has lost its meaning only for him.

''I don't even know how long she's been gone.
It's like I've woken up in bed and she's not here...
because she's gone to the bathroom or something.

But somehow, I know she's never gonna come back to bed.
If I could just... reach over and touch... her side of the bed,
I would know that it was cold, but I can't. I know I can't have her back...

But I don't want to wake up in the morning, thinking she's still here. I lie here not knowing... how long I've been alone. So how... how can I heal? How am I supposed to heal if I can't... feel time?''

Viewing this the second time some of the lines that were not funny initially become very funny. The voice-over in the chase scene with Dodd is an example. Leonard finds himself running and he says, "So what am I doing?...I'm chasing him....No, he's chasing me!" Or when Teddy asks about the gun, Leonard says, "Must be his. I don't think they'd let somebody like me carry a gun." Or Teddy's line to Leonard, "I've had more rewarding friendships than this, but I get to keep telling the same jokes."
The key to the powerful psychological ending of the film, where we realize what will eventually happen, occurs when Natalie tells Leonard that revenge is useless because he won't remember it. He replies, "It doesn't matter whether I remember or not..." Indeed we see that he really doesn't remember his revenge after carrying it out. Thus revenge is a temporary asphyxiation until the point where it is carried out rendered obsolete; The ideology regarding lack of memory shows the never ending cycle regarding a puzzle Leonard can never solve but ultimately he doesn't want to solve. He wants to forget.
On another level this is a film questioning what criterias make us human. What would life be like if we lived in an eternal present without preference or knowledge regarding past prior memories? We could be easily exploited by those with knowledge of the past, as Leonard is, but there is a deeper question being asked. Does life have any real meaning for a person without memory?
Is this due to the fact we've given a mass of information by then and think we know Leonard and his situation better? Or is he, as his narrative progresses, getting vaguer, moving towards inertia, the catatonia that finally swamped his altar-ego Sammy Jankis. Our problem is that the film comprises not one plot, but four, all fragmented, full of gaping black holes, all mediated by this character who knows nothing. One is Leonard's narrative as he sees it, as he tries to avenge his wife's murder. The second is told in monochrome flashback (or whatever this is called in a film that runs backward), mostly told in mysterious phone calls, and seem to flesh out the gaps missing in the first plot, but actually creates more. The third is the real plot that may have something to do with the police, betrayers, false companions, or indeed hallucinated, misremembered by Leonard, or simply placed there as a smokescreen for another plot that is a paradox. The fourth thread is the story of Sammy, whom supposedly suffered the same condition as Leonard. ''Remember Sammy Jankis...'' is what Leonard has tattooed on his hand; It's meaning? Sammy Jankis is symbolizing Leonard's tragic past.
All four unique strains are obviously connected with each other to create a discordant vision, but each undermines the other.
In a relative sense, hell is here, and Leonard is in a never-ending hell. We can only take the opening sequence, where Leonard stands holding a fading photograph over a dead man's bloody body as the only reliable image, and in this image, it is slowly slipping away, untouchable, like Leonard's memory, like the film, like Memento. The ending is the beginning.

''My wife deserves revenge, whether I know about it or not.''