Family Guy: Back to the Multiverse review
47 Views
0

It's OK, but it could of been better! 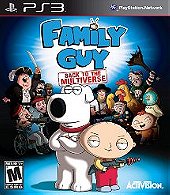 I am a big fan of Family Guy and when I heard they were having a 2nd game I knew I wanted it. Until I saw some screenshots and the graphics were how should I say, not good. But I still gave it a chance and I bought it on the PS store for £19.99 and played it. And well, it was alright I guess. Though the thing I didn't like was the number of characters quotes and clips were used from the show. I mean I would of thought the creators and writers would come up with something new for the game, but they didn't. So using the same jokes and gags over again was kind of a let down.

Now I was hoping the graphics would be great because this came out in 2012 so I don't understand why they didn't use a better engine to make the graphics look like they do nowadays. Another thing I didn't like was the challenge (not in story mode) where you had to take a certain number of pictures before time runs out, the thing I didn't like about was the amount of enemies running towards you and hitting you whilst you're trying to take the pictures. I mean I couldn't even get half the number of pictures needed on easy!

So next time, Family Guy decides to make another game, they should hopefully improve on the graphics and write new jokes and gags. For now as a big fan of the show, I'm still playing it to see how it goes. I would recommend you watch some gameplay on YouTube before deciding to buy it!