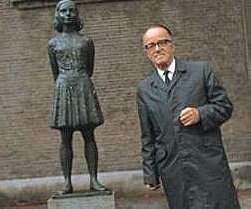 Born in Hohenelbe (now Vrchlabí) in the German-speaking part of Köninggrätz region (Královéhradecký kraj/Hradec Králové Region), north-eastern Bohemia, Austria-Hungary (now in the Czech Republic), he joined the Austro-Hungarian Navy during the First World War once his education was completed, but was discharged in 1918 after being wounded. He moved to Germany and worked as an electrician, then in 1920 moved to Utrecht, Holland to work for a company selling pectin. He joined the Amsterdam branch of Opekta as Otto Frank's deputy in 1924. He became a Dutch citizen in May 1938. In 1940 this allowed him to prevent the Nazi confiscation of Opekta and he accepted the directorship of the business, renamed Gies and Co, from Otto Frank. He and his wife Laura Maria Buntenbach-Kugler (10 May 1895 - 6 December 1952) lived in Hilversum during the war, a distance of about sixteen miles from Amsterdam.

From July 1942 to August 1944 he aided his colleagues Miep Gies, Johannes Kleiman and Bep Voskuijl in the concealment of eight people, including Anne Frank in a sealed-off annexe in their office premises on Amsterdam's Prinsengracht. He was arrested by the Gestapo on 4 August 1944, after an unknown informant betrayed them.

He was interrogated at the Gestapo Headquarters on the Euterpestraat, then transferred the same day to a prison for Jews and 'political prisoners' awaiting deportation on the Amstelveenseweg. On 7 September he was moved to the prison on Weteringschans, in a cell with people sentenced to death. This was followed, four days later on September 11, by a transport to a concentration camp in Amersfoort where he was selected for transport to Germany. On 17 September the Amersfoort train station was destroyed in a bombing (Arnhem Air Raid) and on 26 September, he and around 1100 other men were taken to Zwolle for forced labour, digging anti-tank trenches. Kugler was moved again on 30 December 1944, to Wageningen for forced labour digging under the German S.A. (Brownshirts or Storm Troopers) until 28 March 1945, when some 600 prisoners were marched from Wageningen through Renkum, Heelsum, Oosterbeek, Arnhem, and Westervoort, to Zevenaar with the intention of going on to Germany the following day. There was a bombing raid during the march and Kugler took advantage of the confusion to escape. He was hidden by a farmer for a few days, borrowed a bicycle and made his way back to Hilversum, which he reached in April 1945. He hid there until the liberation of the Netherlands on 5 May 1945.

His wife, Laura Kugler, died on 6 December 1952 and three years later he married Lucie (Loes) van Langen. The couple moved to Canada, where his brother, sister and mother already resided. On 16 September 1958, he appeared as a guest challenger on the TV panel show To Tell The Truth.

In 1973 he received the Yad Vashem Medal of the Righteous and in 1977 the Canadian Anti-Defamation League awarded him a 10,000 dollar prize in recognition for his assistance in the hiding of the Frank and van Pels families.

1. To Tell the Truth

1. To Tell the Truth