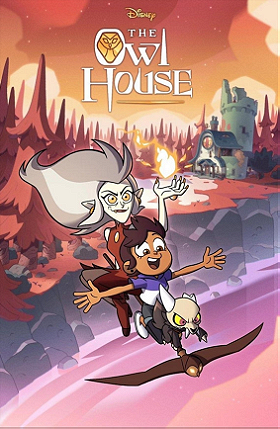 7 votes
Movies according to my dreams (99 items)
list by Max the Movie Guy
Published 6 years, 11 months ago

View all The Owl House lists

View all The Owl House pictures

SilverChilds Corner added this to wanted list 1 month, 4 weeks ago

Batamon added this to wanted list 2 months, 3 weeks ago

Max the Movie Guy added this to a list 3 months, 3 weeks ago

Movies according to my dreams (99 movies items)

"In a new season of The Owl House, Luz has grown distant from Eda and Lilith but not from King, who in fact refuses to leave her side at any time even when he's not allowed. Now 17 and still studying in the Boiling Isles, but at college by a dark, wretched forest, she and Amity have become so madly in love that they've adopted pretty much all of each other's characteristics, and together with Willow, Gus and King unite to fight a dark force consuming the forest and soon the whole Boiling Isles, w"

Marian added this to have watched list 5 months, 1 week ago

themiguelps2 added this to a list 5 months, 2 weeks ago
Cartoons (321 tv items)

NoVeoCaricaturas rated this 8/10 10 months, 2 weeks ago

sandya added this to have watched list 11 months, 3 weeks ago

juacogamertops rated this 6/10 1 year ago

magicarrow rated this 5/10 1 year ago

Sankakkedd added this to wanted list 1 year, 2 months ago