"His wealth is quite useless to him, really. He doesn't do any good with it; he doesn't even make HIMSELF comfortable with it."

Literally billions of filmic adaptations of Charles Dickens' A Christmas Carol have been produced over the decades. Of these adaptations, most critics consider 1951's Scrooge (with Alastair Sim) to be the best and most definitive. However, in this reviewer's oh-so-humble opinion, director Clive Donner's 1984 made-for-television rendering of the classic holiday tale surpasses the 1951 version in just about every aspect. Benefitting from top-notch performances right down the line and sharp screenwriting, not to mention surprisingly strong filmmaking technique for a TV movie, 1984's A Christmas Carol is a masterpiece of Christmastime cinema. 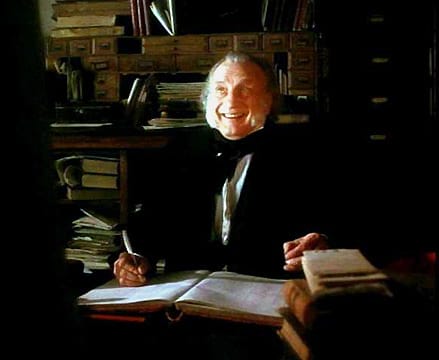 The embittered old Ebenezer Scrooge (George C. Scott) is one of the cruellest men in London, and Christmas is his least favourite time of the year. With Christmastime upon him yet again, Scrooge could not care less; he's far more concerned with running his business and torturing assistant Bob Cratchit (David Warner). Scrooge's nephew Fred (Roger Rees) invites the curmudgeon to Christmas dinner, but Scrooge instead looks forward to spending the festive season alone. Upon his arrival home on the evening of Christmas Eve, Scrooge is visited by the ghost of his late business partner Jacob Marley (Frank Finlay) who warns the old man that his miserly ways may lead to his soul being tormented for eternity. As the night wears on, Scrooge is visited by the Ghost of Christmas Past (Angela Pleasance), the Ghost of Christmas Present (Edward Woodward) and the Ghost of Christmas Yet to Come (Michael Carter), who take the bitter man on a grim time-travelling journey.

Roger O. Hirson's screenplay for this A Christmas Carol is a remarkable piece of work, remaining faithful to the source material while at the same time containing various effective alterations. In this day and age, Dickens' original dialogue is dry and vague, and it's at times difficult to grasp exactly what the characters are saying. Hirson clearly took this into consideration. Accordingly, he altered a lot of the dialogue for improved flow and comprehensibility, giving it his own distinctive, poetic spin. Couple this with the outstanding acting, and A Christmas Carol is reliably engaging despite its overly verbose disposition. Additionally, this retelling contains more of the novella's emotional nuances and back-story, bringing about a fleshed-out version that never feels excessively dragged out. Director Clive Donner takes his time during the visions of the past, present and future, giving us a chance to see Scrooge's life journeys and transformations, on top of feeling the warmth of Fred's family and the austere poverty of the Cratchit household. Another effective scene here (which I've not seen in any other adaptation) focuses on a poor family on the street, starving and homeless. They consider workhouses (an option Scrooge supports in the film's early scenes), but the ramifications would be tragic for the family. It's a heart-wrenching scene, and it's terrific food for thought for Scrooge. 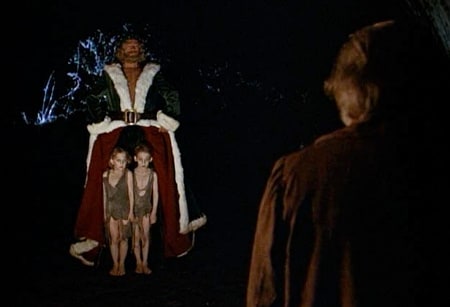 A Christmas Carol was made for television, yet it for the most part feels like a theatrical feature due to its lush recreation of London in the 1800s. On top of the authentic-looking sets and costumes, director Donner conducted extensive location filming rather than relying on obvious, stagy studio back-lots. The English town of Shrewsbury was chosen by the makers to stand in for Victorian London, and its lived-in nature further contributes to the production's aura of authenticity. The special effects, too, are impressive by today's standards, most notably the effects which bring Jacob Marley's ghost to life. If there's a fault with A Christmas Carol, it's that its television origins are obvious from time to time, as there's not a great deal of cinematographic flair and some scenes could have benefitted from additional flourishes. With that said, though, the horror aspects of the story were handled flawlessly. This is, after all, a ghost story. Thus, key scenes such as Marley's visit and Scrooge in the graveyard with the Ghost of Christmas Yet to Come are truly dark and scary.

Alastair Sim's portrayal of Ebenezer Scrooge is widely regarded as the best, but George C. Scott gives Sim a run for his money. Scott does not seem to play Scrooge - he is Scrooge; he disappears into the character to brings the miser to vivid life. In Scott's hands, Ebenezer Scrooge is a fully-realised three-dimensional human being, and at no point does his portrayal go overboard (whereas Sim's acting was at times too histrionic). One of the most notably brilliant things about the depiction of Scrooge here is that he continually resists repenting and keeps dismissing both the spirits and their visions. That is, until the Ghost of Christmas Yet To Come forces him to view his own name on a laid tombstone. It's not the notion of his own death that's upsetting - it's the fact that nobody cares or grieves his passing. At this point, Scrooge realises that his lifelong pursuit of wealth has been worthless. What's also truly masterful is the way Scott manages to convey that Scrooge is visibly scared but is trying to hide it. 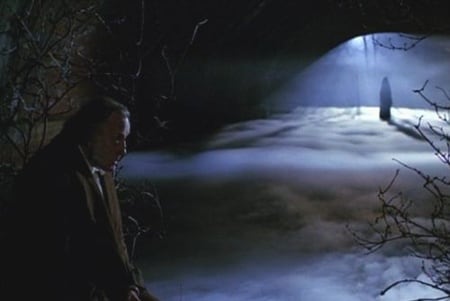 Fortunately, Scott is surrounded by a magnificent supporting cast. In fact, the acting from top to bottom is faultless. As Bob Cratchit, David Warner is never anything short of convincing. Warner does a terrific job of shaping the character of Cratchit; a poor man in a humiliating situation who struggles to keep his dignity intact. And when Bob breaks down over Tiny Tim's death, Warner's acting strikes a major emotional chord. Frank Finlay, meanwhile, is genuinely frightening as Jacob Marley. Added to this, Finley skilfully displays sadness and overall humanity throughout his scene to shine. Finley is, quite convincingly, the best cinematic incarnation of Jacob Marley to date. Also worth mentioning is a charismatic and believable Roger Rees as Fred, the narrator of the story and Scrooge's nephew. The performances from all three spirits are strong, too. What's especially good about Angela Pleasence and Edward Woodward (as Past and Present, respectively) is that they openly mock and poke fun at Scrooge with a sarcastic tone. Rounding out the main players is Anthony Walters, who's the most authentic and credible Tiny Tim that this reviewer has seen. Tim in the 1951 version looked too healthy, but here Walters is both tiny and sickly-looking.

If you're unfamiliar with the story of A Christmas Carol and have never seen a filmic adaptation of Dickens' novella, this 1984 version is the one to watch. It's cohesive, it's easy to follow, and at times it's quite affecting. Sure, it's not as fun as something like The Muppet Christmas Carol, but it delivers its humanistic message in an earnest, effective, and at times utterly heart-warming way. This is a marvellous film.


I saw this film for the first time when I was 14 years old at high school. When I was in the shops, I spotted it and thought to myself that it is long overdue for a rewatch. When I rewatched it, I really enjoyed it!! I cannot believe how underrated this film really is! It isn't as popular as the 2009 version but it should be! This film is very different compared to the Robert Zemeckis adaptation and there are some things that are better in this version than in the new version. This one wasn't even HALF as terrifying as the 2009 version was. This 1984 version isn't as good as the 2009 version but one thing that it does have more: a bit more Christmas magic.


George C. Scott's performance as Ebenezer Scrooge was absolutely brilliant!! I cannot believe how underrated his performance is. He not only made Scrooge quite terrifying at the start of the film before the three Christmas Ghosts visit him but made him a really kind and gentle man on Christmas Day AFTER the three ghosts visited him. It's a damn shame that he didn't receive as much credit as he deserved in this film. It is set on Christmas Eve seven years after the death of Scrooge's business partner Jacob Marley. Ebenezer Scrooge is a cold-hearted, greedy and tight-fisted man who absolutely despises Christmas and all happiness. That night Marley's ghost confronted Scrooge and warns Scrooge that a series of other ghosts will visit him that night. Scrooge goes on a journey that will change his ways forever.


Overall, A Christmas Carol is an extremely underrated adaptation of the Charles Dickens classic! I do prefer the 2009 version but I can't deny that is one of the best Christmas films of all time and one of the best George C. Scott films as well.

this is a better version


This is probably my favorite version of 'A Christmas Carol' (besides 'Scrooged' but that's a different story). It has a great Scrooge (George C. Scott) and one of the better Ghost of Christmas Present depictions. If you're going to start somewhere with this story, start here.