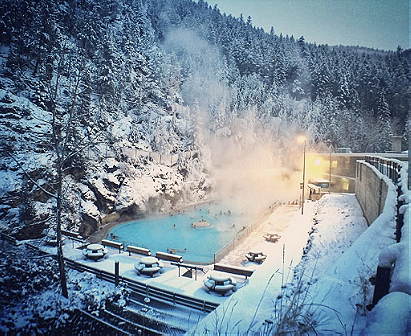 View all Radium Hot Springs pictures
Radium Hot Springs, informally and commonly called Radium, is a village situated in the East Kootenay region of British Columbia. The village is named for the hot springs located in the nearby Kootenay National Park. From Banff, Alberta, it is accessible via Highway 93.

The hot springs were named after the radioactive element when an analysis of the water showed that it contained small traces of radon which is a decay product of radium. The radiation dosage from bathing in the pools is inconsequential; approximately 0.13 millirems (1.3 μSv) from the water for a half-hour bathing, around ten times average background levels. The air concentration of radon is about 23 picocuries (0.85 Bq) per litre which is higher than the level (4 picocuries per litre) at which mitigation is necessary at residences; but is also inconsequential (about 0.7 mrem or 7.0 μSv for a half-hour bathing) from a dose impact perspective.