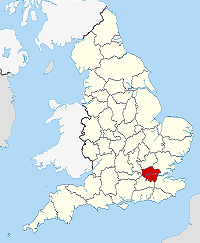 View all Greater London pictures
Greater London is an administrative area and ceremonial county in southeast England that covers the United Kingdom capital of London. The administrative area was created on 1 April 1965 and has been the London region since 1 April 1994.[2] It comprises the City of London and 32 London boroughs, of which 12 are Inner London and 20 Outer London boroughs.[3] The ceremonial county used by the Lord Lieutenant of Greater London does not include the City of London.[4] The Term 'London' as a capital city generally refers to Greater London as well as the ancient Roman City of London settlement and very rarely refers to the City itself, since it's 1.12 sq mi city limits, as well as its population of only 7,375 people, actually makes it the smallest city in England. Greater London Authority, consisting of the Mayor of London and the London Assembly, headquartered in City Hall, has been responsible for strategic local government since 2000. Greater London occupies the same area as the London European Parliament constituency. It is at the first level of NUTS for statistical purposes, covers 1,572 km2 (607 sq mi)[5] and had a population of 8,174,000 at the 2011 census.[6] It has the highest GVA per capita in the United Kingdom at £37,232.[7] The term Greater London was in use before 1965 to refer to various areas larger than the County of London such as the Metropolitan Police District.

sav7 added this to have visited list 3 years, 6 months ago