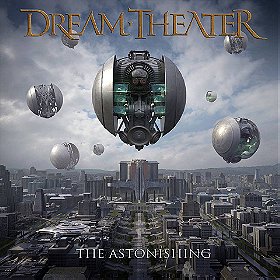 View all The Astonishing pictures

The Astonishing is enriched exponentially by the integration of a real orchestra and choir, arranged by conductor David Campbell, whose work graces over 450 gold and platinum albums, including watershed releases from Adele, Justin Timberlake, Linkin Park, Evanescence, Beyoncé, and his son, Beck. The Astonishing was produced by Petrucci with engineering and mixing by Richard Chycki, whose resume includes work with Rush, Aerosmith, and Mick Jagger. Other organic sounds are more abundant than at any point in the band's history, with Rudess in particular relishing the tones from a grand piano and Hammond organ.

Like Tommy or The Wall, the songs on The Astonishing work as both singular compositions and overall story components. Writing the music as a duo, Petrucci and Rudess venture into unexplored corners of their sound without sacrificing their musical identity. ... (more) (less)
Manufacturer: Roadrunner Records
Release date: 29 January 2016
Number of discs: 2
EAN: 0016861749323 UPC: 016861749323
Tags: Progressive Rock (1), Progressive Metal (1), 2016 (1)
My tags:

Erik Handel added this to list 3 years, 10 months ago

INEEDYUO added this to a list 4 years, 7 months ago
Recent Listenings (50 music items)